Two and a half years after the Greek molecular biologist and DNA repair researcher Maria Fousteri was found guilty of scientific misconduct by her former employer, the Leiden University Medical Center (LUMC) in the Netherlands, exactly nothing at all happened. LUMC, who requested retractions of 4 of her papers due to “falsification of data” (all in the journal Molecular Cell) met academic reality. Fousteri was paid out her €1.5 mn ERC grant up untill 31 October 2018 and in full, because ERC ignored the LUMC letter and even lied to me about having never heard of the case. In reality, LUMC sent on June 15th 2016 letters to all parties involved, including to EU officials (since also Fousteri’s investigated work at LUMC was EU funded).

One letter was addressed to Molecular Cell and requested retraction of her two papers which originated at LUMC. Just like ERC, the publisher Cell Press decided to ignore that request. Not a single one of five investigated papers was retracted or corrected to date. That was also because Fousteri’s former British postdoc advisor, Alan Lehmann, had his University of Sussex run a counter-investigation to save his paper from retraction. It seems Lehmann also prevented a request for correction from being sent to American Society for Microbiology (ASM), regarding another Fousteri paper which LUMC found not awfully enough manipulated to warrant a retraction. The publisher ASM had absolutely no clue of LUMC findings till I informed them earlier this month.

Fousteri’s collaborator Jesper Svejstrup at The Crick in London apparently did a similar thing, for another Fousteri co-authored paper which LUMC recommended for retraction. Both British universities then informed Fousteri’s present host institution in Greece, the Biomedical Sciences Research Center “Alexander Fleming” that her work was perfectly reliable. Fleming Institute had no choice but accept that, save for some crazy Dutchmen, nobody else, not even the paymaster European Union, has a problem with their group leader Fousteri and left it at it. At least until last week, as the ERC money was still flowing in. The Fousteri lab has been training the next generation of scientists, presently 5 PhD students and 4 postdocs, for all we know in the art of Photoshop.

For reference, I published the relevant  evidence and linked to the LUMC in my article from August 2016. Apparently, it was the first time LUMC had such an investigation, they even had to develop a protocol. Nowadays, Netherlands has a proper centralised code of conduct and procedure regarding research misconduct investigations.

A Dutch news site reported in 2017 in two articles by Jop de Vrieze (here and here) an article about the whistle-blower and former PhD student Saskia Vorstenbosch who uncovered Fousteri’s fraud and provided LUMC with all the evidence. Vorstenbosch, whose entire PhD project was based on someone else’s fake data, has left academia without getting her doctorate. LUMC told her she would have to start her PhD over again, from scratch. Meanwhile her former supervisor is faculty member at Fleming, retained her ERC funding and her fake papers, and recently even managed to publish in Nature Communications. That paper served its purpose to satisfy ERC about the success of their €1.5mn grant to Fousteri. Second chances, you know. Just not for whistleblowers.

Recently, I obtained from LUMC some of the letters they sent on June 15th 2016 to Molecular Cell and Fousteri’s co-authors, including her former LUMC boss Leon Mullenders, who was berated by his poor leadership and appalling attitude to good scientific practice and sent into emeritus retirement. Back then, Mullenders sided with Fousteri during the entire investigation and dismissed Vorstenbosch’s evidence with:

“that’s not right, but that’s was probably only embellishing of the results. It does not hurt the truth, so it’s not a problem.”

The EU officials, who since 2011 gave Fousteri €1.7mn in total (starting with her Marie-Curie fellowship of €200k) to set up her own lab in Fleming Institute, did not allow LUMC to give me the letter they received. Obviously to support their previous claims that ERC and EU Commission were never informed, and hence didn’t have to do anything. Which is nothing less but a pathetic, shameful lie. But we already know how little ERC cares about research integrity, read here, here and here.

The first two Molecular Cell papers were authored at LUMC, they proved also to be the most manipulated ones, hence the Dutch institution were in their right to request a retraction. Only that Molecular Cell wiped their bums with the request. Nothing at all happened. The dean of LUMC, Pancras Hogendoorn, told me in August 2018:

“We certainly did substantial efforts for retraction and are even frustrated to some extent that the journals did not act so far in public, though from recent communications it appears there is something happening finally.”

These are the two papers which Molecular Cell refused to retract despite explicit request from LUMC:

This get-lost attitude from Cell journals is actually nothing special, but rather a standard. They seem to only agree to retract a paper when authors themselves ask for it. Otherwise, the fraudulent customer is king with this Elsevier outlet of elite science. For reference, some relevant examples from my site, here and here. Or this: Cell deleted my comment on this Harvard paper which linked to official court- registered fraud evidence, available in public domain:

The following Fousteri paper was saved from retraction by the interference from corresponding author Svejstrup from The Crick. Svejstrup never replied to my emails. Incidentally, one of the co-authors, the French DNA repair biologist Jean-Marc Egly, is an expert in research integrity who recently investigated former CNRS president Anne Peyroche and found fraud in her papers. Maybe he should also apply same scrutiny to this paper of his? Because of Fousteri’s creative input, LUMC recommended its retraction. Only: nothing at all happened.

Regarding the following papers, Lehmann previously wrote to me that his University of Sussex was conducting their own investigation. Apparently, Sussex decided to take back control and found LUMC to be slanderous European oppressors, best to be ignored.  Nothing at all happened to the following Molecular Cell paper which was supposed to be retracted. ASM was not informed about the findings in the Molecular Cell Biology paper and the need for at least a correction,. The editor of that latter ASM journal, Roger Davis, told me:

“There is no record of the university contacting ASM concerning the results of their investigation”.

These are the two papers from Lehmann with his postdoc Fousteri, whom University of Sussex found innocent victims of a slanderous Dutch conspiracy.

This is how science self-corrected itself. Not a single one of the fake Fousteri 4 papers was retracted as LUMC requested. The whistle-blower Vorstenbosch left the university and academia without a degree. €1.7 million were given to yet another scientist found guilty of fraud, while ERC is rejecting applications from her honest peers as not good enough scientifically.

The LUMC letters are here. 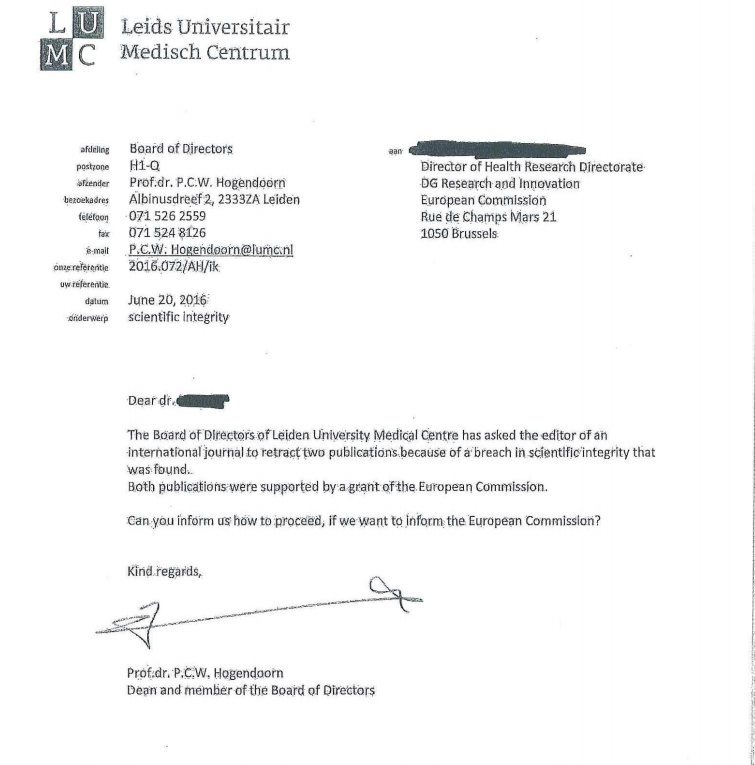 It now proves the ERC lied to me in their email from 16.08.2016 when they denied all knowledge of Fousteri investigation:

Fousteri now published another paper in Nature Communications, despite the journal being perfectly aware of misconduct findings at LUMC. In that regard, I learned the following from a source at LUMC:

FIVE and a half years after the LUMC investigation, two papers by Fousteri are finally being retracted by Molecular Cell. Watch out for the retractions appear any time now for these two papers:

The Fousteri lab at Fleming Centre near Athens is now 10 members strong. Just this year, the lab published in Nucleic Acids Research.

I don’t know why Molecular Cell agreed to follow the 5 and a half old request from LUMC Leiden. Maybe this article was read by too many people.

The two Molecular Cell papers were now retracted, the retraction notices are here and here.

I noticed LUMC removed the online report, the hyperlink I used above is broken now. So here it is: