Maria Fousteri is a highly successful Greek molecular cell biologist who studies the molecular mechanisms of DNA damage repair in human cells and their protective roles “against mental dysfunction or cancer”. Her works in the field of nucleotide exchange repair and epigenetic chromatin remodelling, done at the Leiden University Medical Center (LUMC) in the Netherlands in the department led by the LUMC professor Leon Mullenders, appeared in elite journals such as Molecular Cell.  These publications, described to me by a leading DNA repair researcher as “definitely major papers in the field” consequently helped Fousteri to an ERC starting grant of €1.5 Million for her research project “TransArrest” in 2012. Her young ERC-funded lab is located at the Biomedical Sciences Research Center “Alexander Fleming”in Greece, 20 km south of Athens.

The economic crisis-struck Greek science community should surely be rejoicing about such success of their returning top-scientist, with the most prestigious EU funding award from the ERC in tow. Instead, Fousteri’s colleagues at Alexander Fleming recently learned that a LUMC investigation found her guilty of data manipulations and research misconduct in 5 publications. Once again, it is about western blots. Images were re-used in unrelated context, lanes spliced and occasionally even bands duplicated inside a continuous gel image. The DNA nucleotide exchange repair specialist Fousteri seems to be just as professional in exchanging of western blot bands. These are the five papers, the first four (all in Molecular Cell) were recommended for retraction:

LUMC published the results of the investigation on their website on June 16th 2016. Especially the first paper, Fousteri et al 2006, proved to contain many instances of deliberate data manipulation (see details below). But also the other papers offered enough evidence of misconduct to warrant retractions.

Fouseri’s name and her publications were blackened out in the publicly available report version, a decision by the Netherlands Board on Research Integrity (LOWI) made sure the unblackened version will only be distributed to a small circle of recipients, including Fousteri’s coauthors, the editors of Molecular Cell who were asked to retract the Fousteri et al 2006 and Moser et al 2007 papers, and also her current host institute in Greece

Babis Savakis, president and scientific director of the “Alexander Fleming”, replied to my inquiry about Fousteri misconduct investigation at LUMC as follows:

“Fleming is aware of this case and is currently looking into it. We will arrive to a decision after a careful and thorough review has been completed. Until then, as a matter of policy, we cannot make any comments”.

Fousteri was reported for suspicions of misconduct by her former LUMC colleagues already in 2011, according to the published report. The evidence was overwhelming, the only questions remaining were as to who exactly had faked the figures. Soon Fousteri herself admitted having manipulated data in one of her publications, yet instead of retracting that paper, she retracted her admission of fraud. As the result, an internal investigation by the LUMC department concluded in January 2014 that “there was no definite proof of a breach of scientific integrity by the defendant, given the complexity of the research”. The decision was appealed, and this new external investigation by LUMC came to a different conclusions:

“The Committee concludes that serious breaches of scientific integrity have been committed by Dr. Fousteri while employed at the Leiden University Medical Center. Following the listing of scientific misconduct as given in 1.2, this falls under a. falsification of data and h. acting unacceptably inaccurate in performing research. With reference to the LUMC Code of Conduct for Scientific Integrity (Regeling Wetenschappelijke Integriteit LUMC) it is considered scientific misconduct to wilfully manipulate research results to make them look better. Given the large number of instances in which figures were manipulated, which took place in several publications over a period of several years, and which have grievously misled readers, the Committee concludes that this constitutes a serious breach of scientific integrity. The Committee concludes that several publications need to be retracted. […]

It should be noted that the Committee has only been able to investigate a minority of the data that were presented in the publications, since in many instances primary data were lacking or not properly archived. The Committee did also not investigate unpublished data that were used in scientific presentations. Multiple instances of data manipulation have been found in all five publications that the Committee has investigated. These are clearly most numerous in two publications  (1,2) [Fousteri et al 2006 and Moser et al 2007, -LS], which originated from the LUMC, that will need to be retracted. In two other publications the manipulations were less numerous (3,4), [Anindya et al 2010 and Ogi et al 2010, -LS] but still of a nature that the Committee believes retraction is in order. However, since these publications did not originate from the LUMC, which only provided part of the experiment, the Committee advises further action to be taken by the institutes in the United Kingdom, where the main responsibility for these publications lies. Finally, although not the result of acceptable practice, the irregularities in the fifth paper (5) [Theron et al 2005, -LS], for which the main responsibility also resided at another institution, led the Committee to suggest a correction to be sent to the journal in which the manuscript was published”.

Alan Lehmann, professor for molecular genetics at the University of Sussex in UK and last author of the Ogi et al 2010 and Theron et al 2005 papers with Fousteri-manipulated data, commented to me as follows:

“The University of Sussex is conducting its own independent investigation. When this is concluded I will discuss with Molecular Cell the appropriate action to be taken with regard to the Ogi et al paper”.

Fousteri’s former head of department Mullenders did not reply to my emails. According to the LUMC report, he told the investigators that “due to this autonomous activity of the defendant, he did not see the original experimental results, and therefore did not oversee the construction of figures from these for publications and presentations”.

Though Fousteri was found to be alone responsible for all data manipulations, Mullenders was anything but a hapless victim of her crimes. In fact, he was assigned part of the blame for his leadership style, and consequently retired as head of department (as indicated by the LUMC report). His name is not listed on the department website anymore, though he remains associated with LUMC, according to phone directory.  This is what the investigators decreed about Mullenders:

“The section in which Dr. Fousteri worked had no uniform way of guaranteeing the integrity of research, and there was no protocol in which standards and procedures were described. Generally accepted archiving processes, such as keeping a laboratory journal, were not always followed, although some individuals did so meticulously. The head of the section could have been aware of this, and professed a belief in adequate archiving to the Committee, but has not enforced it. There was no policy with regard to experimental validation of results, no critical discussion of the selection of primary data for inclusion in manuscripts. Generally, it seems the concept of falsification did not exist: Hypotheses became biological truths, and experiments were considered successful when they confirmed the hypotheses. The Committee concludes that the lack of adequate procedures, and the lack of enforcing of generally accepted procedures, as well as a general uncritical attitude have contributed to the breaches of scientific integrity. […]

Several PhD students who worked in the Department’s section suffered by Prof. Mullenders and Dr. Fousteri did not complete their PhD, which in one case was directly related to the scientific misconduct reported here, as well as in unpublished experiments that have not been investigated by this Committee, and in one case was likely to be related to the way in which the leadership of the section operated”.

The previous history of Fousteri’s Dutch PhD students makes it a matter of serious concern for the future of her current lab members. Presently, the misconduct -tainted group leader supervises five PhD students in her Flaming lab, plus four postdocs.

What about Fousteri’s ERC funding? According to their report, the investigators notified also the funding agencies associated with the manipulated papers. This mean that the European Commission, which supported Fousteri-Mullenders work though the FP6 funding programme, was informed about Fousteri’s misconduct. The ERC however, though directly associated with the European Commission,  denied any knowledge in their communication to me:

“The ERC Executive Agency was not aware of the information mentioned in your email and we will assess it”.

Also the Fleming director Savakis declared in this regard:

“We are aware of ERC policy regarding scientific misconduct and we will notify the ERC when we arrive to a decision”.

With such schedule, ERC is unlikely to even consider terminating Fousteri’s undeservedly obtained funding. With their other misconduct cases, ERC was not necessarily in any hurry to block the money waste. Especially since Fousteri’s EU support is scheduled to end in October 2017 anyway, little can be expected also here. Another elite research project will be concluded and become just another EU statistic.

There can be however another interesting twist to this story, since all four papers to be retracted appeared in Molecular Cell at Cell Press. Their editorial offices are ultimately controlled by the Cell Editor-in-Chief Emilie Marcus, who displayed in many instances a mind-bogglingly tolerant (if not welcoming) attitude to research misconduct (for details, see my report here). It would therefore be hardly surprising if the retractions requested by the Dutch investigation and possibly also its Greek and British counterparts would not be forthcoming, at least as long as Fousteri opposes them.

This is what the LOWI-adviced LUMC investigation found in Fousteri et al 2006 alone, accompanied by my own illustrations (copyright, naturally, with Cell Press/Elsevier): 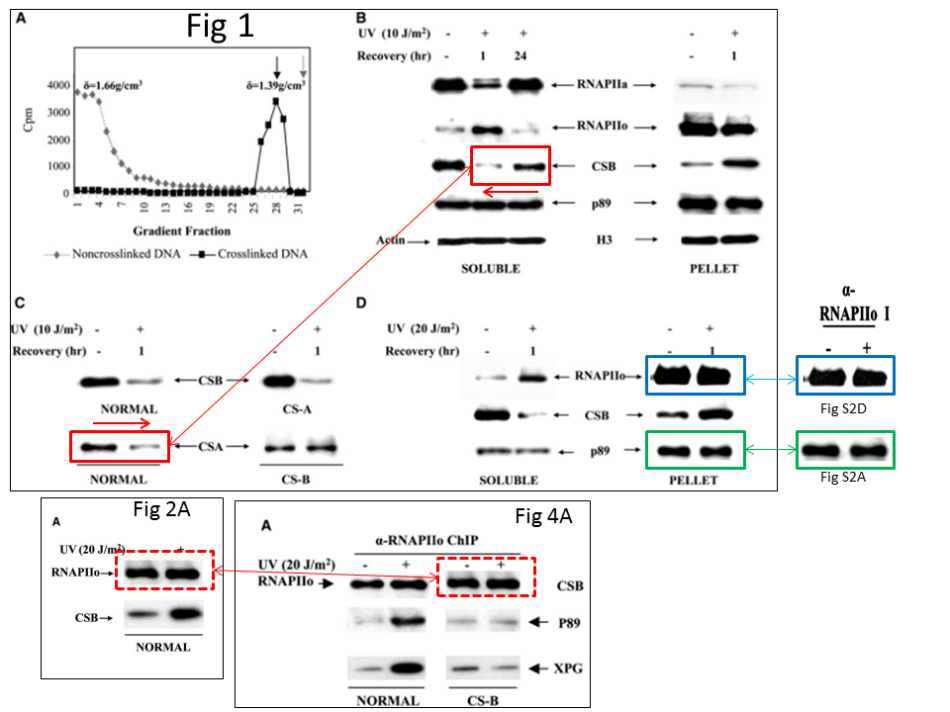