A nightmare for every scientist: a mistake is found in your published paper, like some duplicated images, and you ask the journal for corrections. Yet the editors do nothing and ignore your pleas. This is what apparently happened to the young group leader at the University of Manchester, the cell biologist Chiara Francavilla. The two papers affected are from her PhD thesis in Milan, Italy, and postdoctoral studies in Copenhagen, Denmark. As soon as she found out about the duplicated microscopy images, Francavilla submitted correction requests to the two journals in question, Molecular Cell and Journal of Cell Biology (JCB). It is unsurprising that the former, an Elsevier outlet, ignored all requests for correction, this is unfortunately the known attitude at Cell on data integrity. But with JCB, a society journal published by Rockefeller University Press, this behaviour is most unexpected. JCB used to be the trailblazer in research integrity, first to employ image integrity analysis on all accepted manuscripts. It started with the seminal 2004 article by the editors Mike Rossner and Kenneth Yamada: “What’s in a picture? The temptation of image manipulation”. That editorial is cited basically on every occasion and in every paper when image data integrity is being discussed. What happened since then? 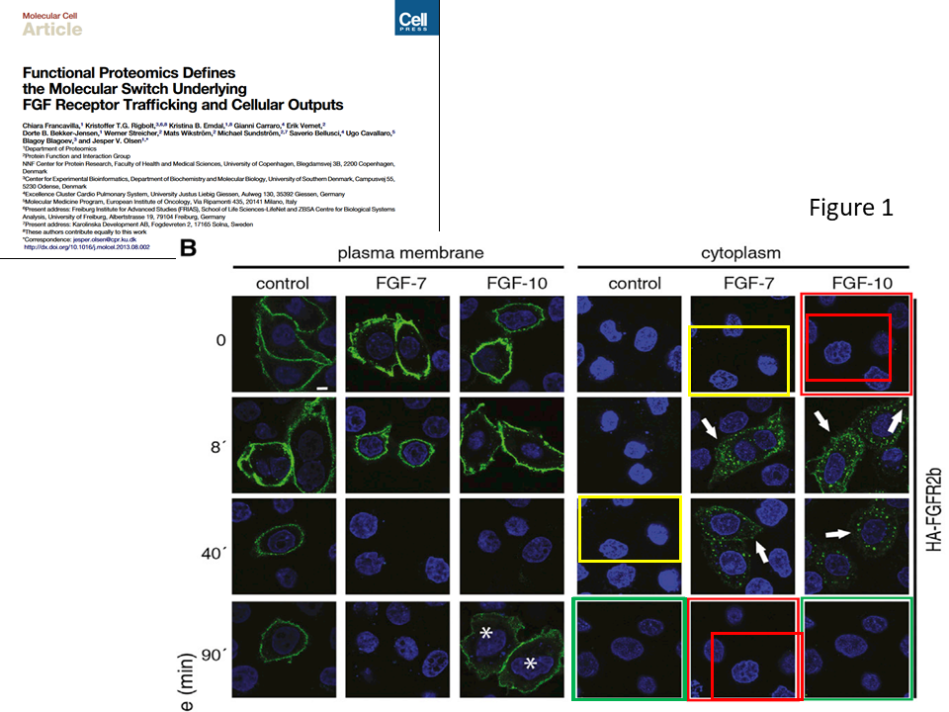 This Figure 1 contains 3 duplicated images, highlighted with colour frames. Those are not exact duplications, all three images are shifted against each other, in particular the red and yellow marked ones. This is likely because in all cases a large confocal microscopy image was inadvertently re-used as two different areas of interests were selected to show two different experiments at two different time points, and with two different settings for signal intensity.

Another figure in that paper also contains three duplications: 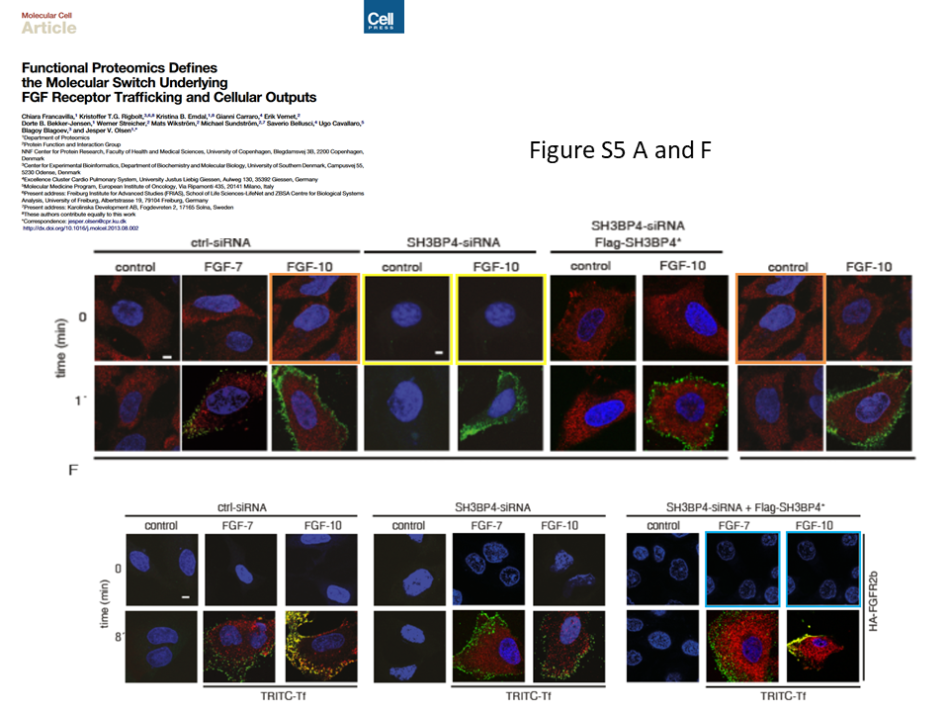 That Molecular Cell study was performed at the lab of Jesper Olsen, professor at University of Copenhagen and group leader at the associated Novo Nordisk Foundation Center for Protein Research. The other paper was done at IFOM (the FIRC Institute of Molecular Oncology) in Milan (see my conflict of interest statement at the end),  it was published in JCB in 2009:

The issue here is one duplicated confocal microscopy image, highlighted with red frame. 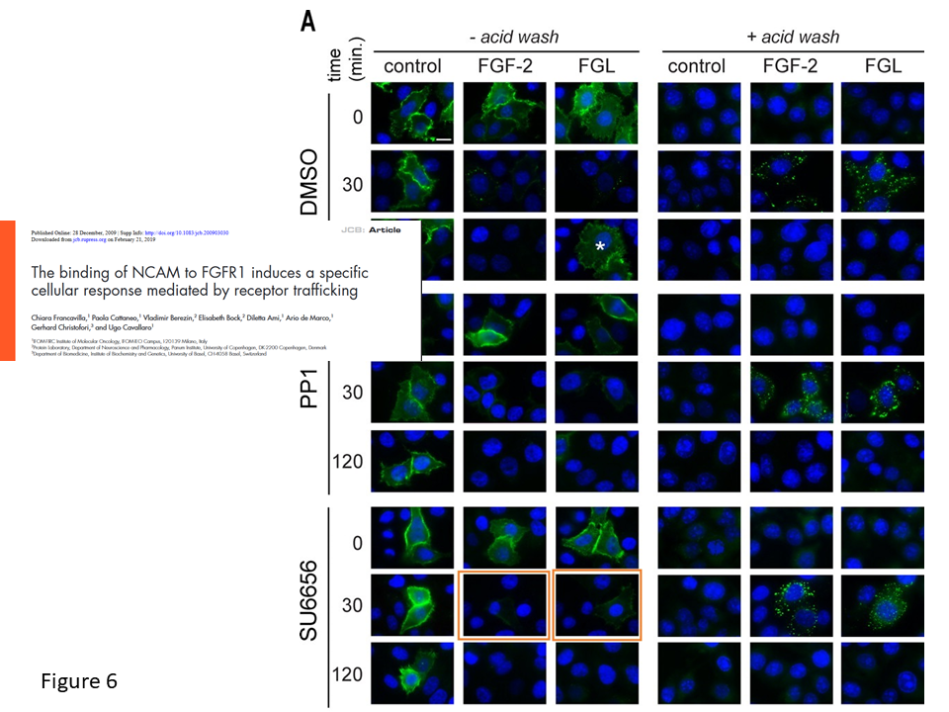 The two images (SU6656, 30′) show differently stimulated cells, and are identical except that the green signal for HA-FGFR1 is for some reason somewhat stronger in the FGL image compared to the FGF-2 one. The blue DNA signal is however of similar intensity in both images. It is probably also an oversight, as the last author and Francavilla’s former PhD advisor Ugo Cavalaro explained to me:

“Chiara knows about these issues on both papers and she informed me as well. I do not have much control on the Mol Cell paper (those data have been generated in Copenhagen), but I know Chiara is actively working to solve every single issue.
As soon as I learnt about the image duplication in our JCB paper (slide 4 in your file), I retrieved the original data and found out that it was a simple mistake (as you indicated, the same image was used twice). Next, I immediately contacted JCB and provided the correct version of the figure. JCB editor (Timothy Spencer) offered to publish a correction, for which we provided an accompanying statement. All this happened between June 27 and July 2, 2018 (I can provide the mail exchange if you wish). I didn’t check whether the correction has been published already, if not it should be published soon.
So JCB is aware of the mistake, and I guess Chiara and Jesper Olsen have informed Mol Cell as well.”

Cavallaro did provide me with his email exchange with JCB editor Tim Spencer from summer 2018. Cavallaro and Francavilla requested a correction, and explained the image duplication in Figure 6:

“Our mistake has no impact on the conclusion from the experiment. In fact, both conditions gave negligible green fluorescence staining without acid wash, meaning that no or very little localization of HA-FGFR1 on the cell surface was detected upon treatment with either FGF2 or FGL for 30 minutes (or 120) and Src inhibition with SU6656. Of note, this confirmed the results shown in the panels above where the other Src inhibitor PP1 was used.”

Spencer agreed with issuing a correction:

“We agree that a correction should be issued and the offending image replaced.
Please provide us with a short statement which explains the error to the journal’s audience. This text should indicate the error (you don’t need to indicate how the duplication occurred, just that the image used in the FGL treatment condi-on was incorrect), what was done to fix the error, and how this changes interpretation of the conclusions (if at all). Once you send us that text, we can proceed with issuing the correction.”

“The authors discovered after publication that one of the images used in Fig. 6A, namely the image related to the 30-minute treatment with FGL in the presence of SU6656 (in the “- acid wash” condition), was incorrect. That image has now been replaced with the correct one, corresponding to that treatment condition. This correction does not change in any way the conclusion from the experiment, namely that no or very little localization of HA-FGFR1 on the cell surface was detected upon treatment with either FGF2 or FGL upon Src inhibition. The authors regret any confusion this may have caused.”

And yet, neither by Molecular Cell (who were apparently also contacted by authors), or by JCB, was any correction ever issued. As mentioned above, one is not surprised with Cell journals, they reject not only corrections requests but also official institutional demands for retractions because Cell editors know it better (read here, here and here).  But why JCB?

Mike Rossner lost his job with JCB when Rockefeller University Press was restructuring in 2013, maybe this was when the policies on image integrity changed?  The journal and its new Editor-in-Chief refused all communication with me, unfortunately.

Cavalaro is not directly associated with IFOM anymore, but with IEO (European Institute of Oncology) and he still works at the same densely packed IFOM-IEO campus in Milan. One of the 10 Scientific Editors at JCB is Pier Paolo Di Fiore, former scientific director of IFOM, now IEO-affiliated and at all times one of the most senior scientists at the IFOM-IEO campus. Cavallaro is presently member of Di Fiore’s research team there. It is probably all a coincidence, just like the image duplications in Francavilla’s papers.

There is not much hope to get research institutions and universities to exert pressure on the journals to finally allow corrections of the literature. Both the University of Copenhagen and University of Manchester had their own cases of truly problematic research, yet even there they did very little to nothing. Manchester proudly employs the notorious zombie scientist Silvia Bulfone-Paus at their school of Biological Sciences (where Francavilla also works). Bulfone-Paus renounced her position as institute director in Germany after 12 retractions (story here), but despite everything she is certainly not affected by the mass-redundancy plans for Manchester University professors.

And at Copenhagen, the case of Janine Erler remains unresolved, no papers were corrected or retracted, but the whistleblowers met with an unfortunate accident when all their cell lines were accidentally thawed and destroyed (read here).

Update: just hours after this article was published, I received this email from JCB Executive Editor Rebecca Alvania:

We examined the materials Dr. Francavilla provided in July 2018 to correct her 2009 JCB paper and approved the correction. Unfortunately, due to a miscommunication on our end the correction files failed to reach our production staff. We are sending the files to production and the correction will be published as soon as possible. Thank you for alerting us to this, we appreciate the opportunity to ensure the published record is accurate.

@schneiderleonid Thank you for bringing this to our attention. The authors already provided the correction to us, and it will now be published ASAP. We appreciate the opportunity to ensure the published record is accurate.

Cavallaro received this message from Alvania:

And what will Molecular Cell do?

Conflict of interest statement: I worked as postdoc in 2008-2012 at IFOM and the IFOM-IEO campus, and know Francavilla, Cavallaro and Di Fiore in person. I never had any significant interactions or conflicts with any of them, then or since.