Gandalf the Wizard has been awarded €75k in cash and Pezcoller-AACR International Award for Extraordinary Achievement in Cancer Research, for his magical western blots, where gel bands multiply under his spell to summon a bigger impact factor. Well, maybe not that Gandalf, but the bearded gel wizard Tony Hunter, of prestigious Salk Institute for Biological Studies (where impure womenfolk is not welcome) in San Diego, California, USA. On April 15th, Hunter will be giving a lecture at the annual meeting  of American Association for Cancer Research (AACR) in Chicago, and then go to beautiful Trento in Italy to pick up his award. All because of those western blots of his, which repetitive enchanted beauty was spotted by the image integrity sleuth Clare Francis and then posted on PubPeer. It was in fact Clare Francis who wrote to me to accuse Tony Hunter of being Gandalf The Wizard.

A breathlessly sycophantic article in San Diego Union Tribune described Hunter as “superstar” of 50 years productivity, congratulated him on his new Nature paper and the cash prize, for which the Salk Gandalf can probably buy himself a new BMW broom stick to whiz about, to and fro. That sum of €75k is actually poppycock compared to the $ half a million Tony the Wizard got from the Royal Swedish Academy of Sciences as Sjöberg Prize for Cancer Research, but that is probably intended as lab investment into more of his magic western blots. Probably as compensation for 2012, when Thomson Reuters, (past keepers of the sacred Impact Factor) requested for Gandalf The Western Blot Wizard the Nobel Prize.

So now, let us see what dashing sorcery the King of Sweden and AACR thought was so astounding to give awards for.

The penultimate author of this paper is Inder Verma, senior scientist and staunch defender of Salk’s virile brotherhood against corruptive witchcraftery by impure womenfolk, and because of that now a deposed PNAS editor-in-chief.

Veteran Salk Institute #cancer researcher Tony Hunter has added yet another award to the long list on his resume. Meanwhile, a team including Hunter has published a new cancer study in @nature. https://t.co/dRD9Z0SVFk pic.twitter.com/9ngq713krY

What does that paper contain on magic stuff? The old loading control re-use, across 3 figures, even duplicated inside same figure, always in a different contest, standing in for different protein samples. Now that we cannot trust the haunted, pardon, Hunter team to have loaded their gels equally, what is the actual message of figure 4 and 5 here? That the results are invalid, if your gel lack proper loading controls. This is why a lab at Vetmeduni Vienna had to repeat experiments, to fix mismatched loading controls.

There is more in that Xia et al 2003 paper, including a gel lane which apparently features inside same gel twice. A magic trick worthy of Gandalf!

This paper has just two authors, and one of them is Gandalf with his magic staff. Look what amazing things happened there, gel lanes doubled inside a gel where pedestrian researchers only manage to ever achieve a single version of any gel band, no matter how often they run it. Of course this sorcery had to be awarded with prizes, and here is a particularly impressive figure from that paper, which simply keeps on giving. Maybe AACR can put it up in their hall of fame?

First author O. Jameel Shah is now Vice President of Cascade Integrative Medicine clinic at Pennsylvania State University. There, they boast with their naturopatic doctors, one does see that Shah knows to harvest the power of witchcraft. He is also responsible for that paper with his sorcery master Gandalf:

Here a careless wave of the magic wand led to re-use parts of gel. Accidentally, this saved on research effort: instead of repeating experiments and loading all samples on the gel, not just select few, one just clones them, because controls do not matter. This practice on in-gel cloning of controls was in fact recently described as proper scientific approach by French CNRS and Sorbonne University. In France, they still do it in Photoshop, whereas the Salk Gandalf has real American sorcery at his disposal. 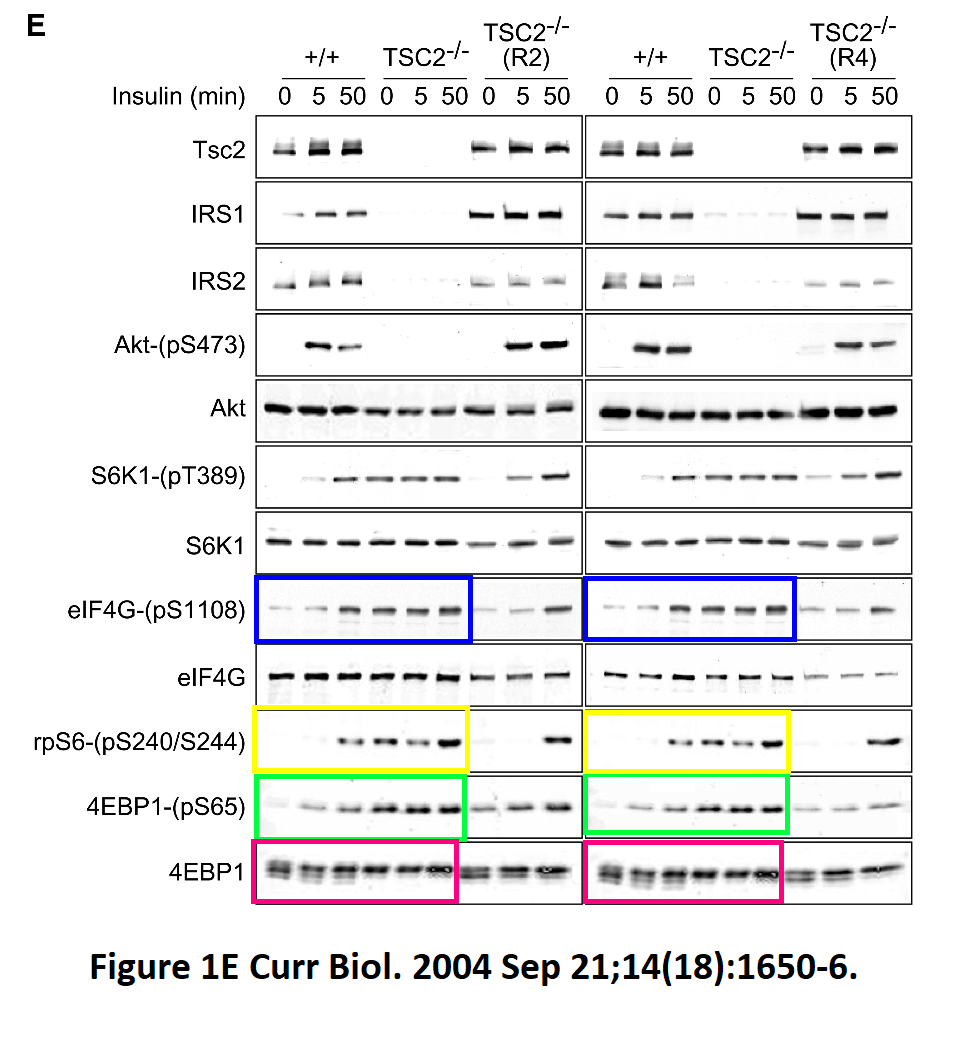 Inhibition of c-Abl Tyrosine Kinase Activity by Filamentous Actin. Journal of Biological Chemistry (2001) doi: 10.1074/jbc.M100559200  PubPeer evidence here.
Here a reader will appreciate some magically spliced gel lanes (also very well hidden in this Hunter-lab paper by same first author, Woodring et al J Cell Biology 2004). One notices once again that Gandalf must have been a very busy wizard, what with his summoning of NIH grants. Thus distracted, his western blot spell lacked some strength and gel bands did not jump very far to breed themselves. Look at this: 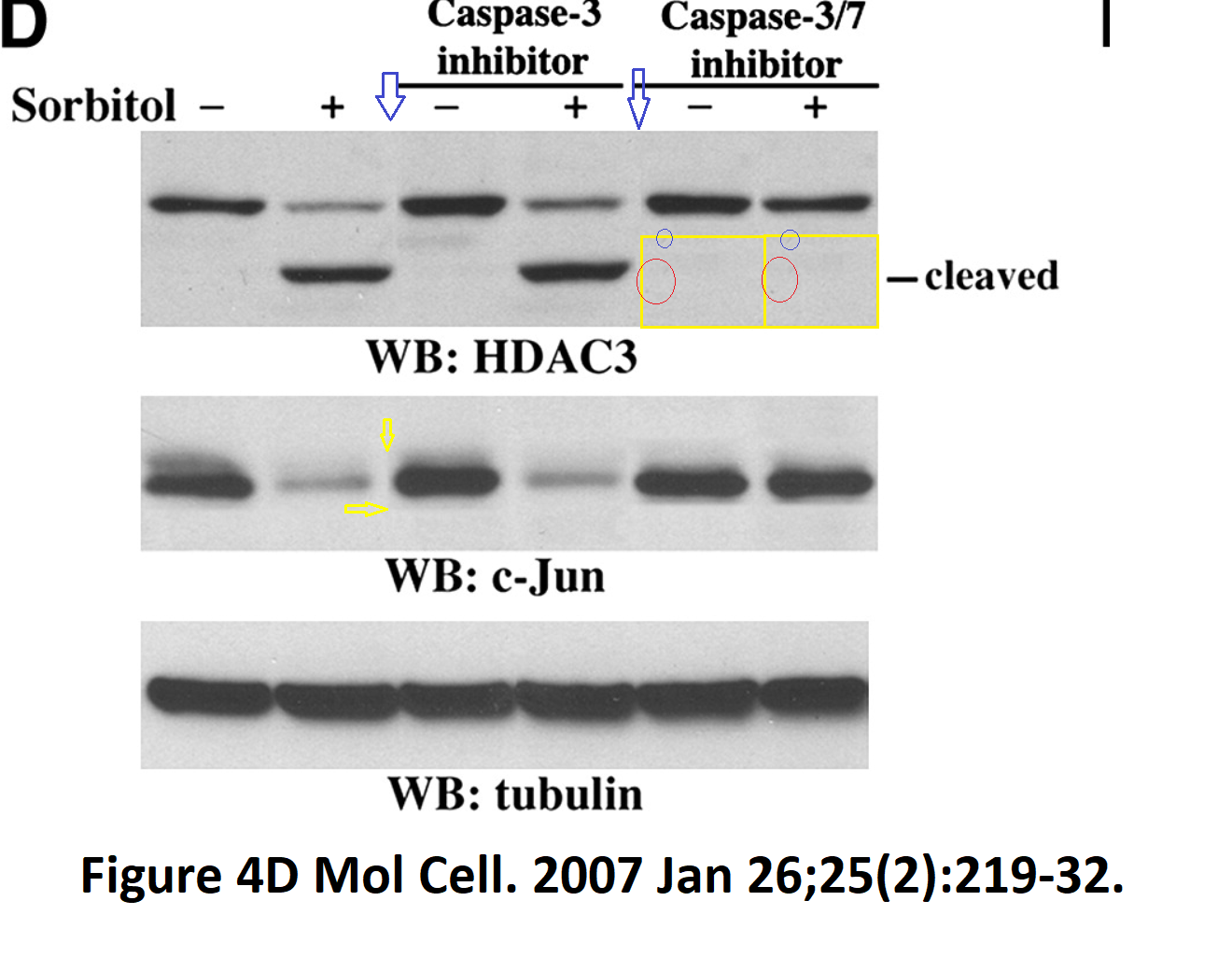 Turning one gel band into two is in fact no easy feat, even for a Salk Wizard. Lots of magic wand waving is needed in Photoshop. A busy sorcerer sometimes can practice on background noise, like the image above shows. Sometimes it is indeed necessary to transplant western blot bands into a new gel background (indicated by yellow arrows), as otherwise fragile bands might wither and rot, showing wrong results. This was for example practice in one University of Marburg lab.
There are also quite some instances of inappropriate gel splicing in the papers from the enchanted lab from Tony the Wizard (eg, Gosh et al, Cancer Cell 2006), because there is a notion in the scientific community that it was acceptable prior to 2008 (or according to above mentioned Sorbonne University, even up to 2013) to dispense with proper loading and other controls if those interfered with desired results. After all, figures in scientific papers are mere “illustrations” of a fairy tale story, as we were once educated by ETH in Zürich. They can and in fact should be drawn with a magic wand, in Photoshop.

Science is a magical enterprise, only true sorcerers and wizards can do it. Hence the current AACR award to Tony Gandalf Hunter.

Disclaimer: the author never read the Ring of the Lords book, nor watched the three-part romantic comedy screen adaptation thereof. His only impression of Gandalf the Wizard derives from here.