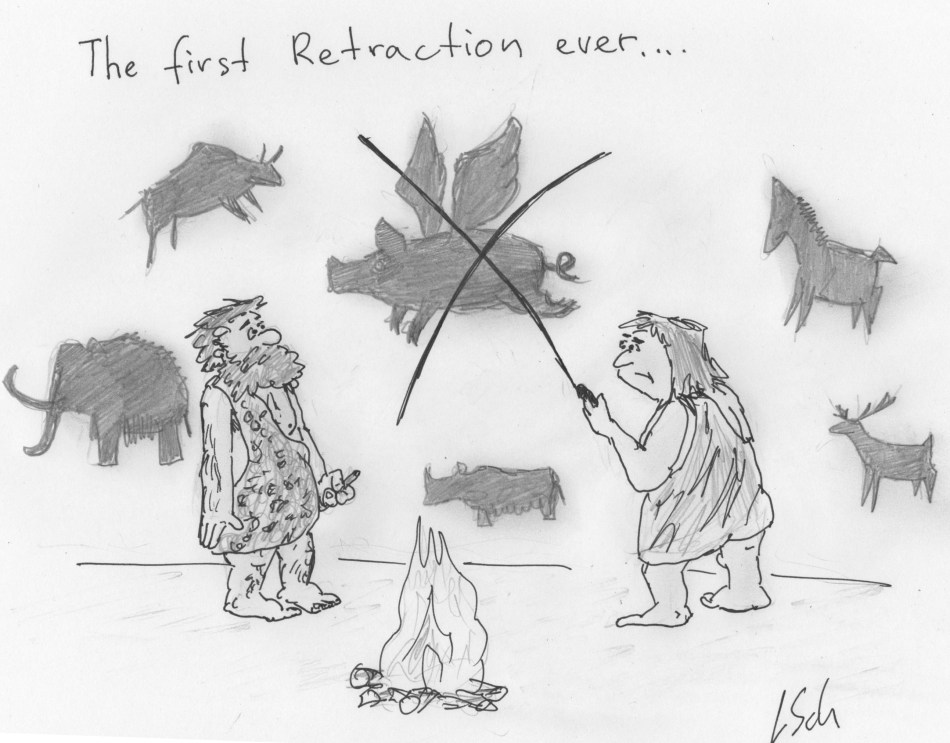 On June 9th 2017, the research integrity news website Retraction Watch brought an article titled: „Journal won’t look at allegations about papers more than six years old, nor from “public websites””. A public outcry followed, protesting about what was perceived an outrageous case of editorial cover-up of research fraud. The journal in question was Molecular & Cellular Biology (MCB), published by the American Society for Microbiology (ASM); the vituperative Retraction Watch article was prompted by an editorial in the June issue of this journal. The problem with that name-and-shame Retraction Watch article however was: the accusatory title did not fit their own main text at all, which did actually clarify that evidence on public websites like PubPeer is in fact very much looked at by the MCB journal editors, just not publicly commented upon. And that:

“The ASM spokesperson explained that, like the ORI, ASM journals will make exceptions to the six-year statute of limitations, for instance if older papers “provide evidence of an extensive pattern of misconduct.””

MCB, the journal which takes actually a rather uniquely tough stance on data manipulation (see below), was “smeared” (according to its editor, Roger Davis) by the Retraction Watch headline for the purposes unknown, without a word of apology later on. The headline was slightly changed, after ASM protested in a comment, but the main accusation of willfully ignoring all misconduct older than 6 years remained. It now goes: “Journal won’t look at allegations about papers more than six years old, nor comment on those from “public websites”. Why it is critique- or news-worthy that a journal does not publicly comment on PubPeer, is not clear. Hardly any journal editor does that, in order not to compromise the confidential communication with authors. Why shaming MCB then?

Yet the original and current headline, plus absence of any clarification from the side of Retraction Watch, were enough for the outrage to start, because: who reads articles beyond the headline, in science or in the news? Scientists expressed anger at MCB, PubPeer commenters denounced the journal online, citing that Retraction Watch article as evidence:

“The editor of MCB chooses to wash his hands and take no responsibility regarding anything that the journal published more than 6 years ago; […] For those of us who aspire to a cleaner scientific literature, we’re going to have to do it for ourselves”. [link]

“Yes, that is what the editor-in-chief of Mol Cell Biol has decided. That does not mean I agree with him. The best strategy might to abandon commenting on Mol Cell Biol papers and concentrate on papers in journals where they will take action. J Biol Chem, J Cell Biol, J Cell Sci… Eventually Mol Cell Biol will stick out like a sore thumb” [link].

Just 3 days later, the online magazine The Scientist brought an article by Kerry Grens, titled:” Journal Cleans Up Image Archives”. It was about MCB, and the story went:

“As part of a comprehensive—and uncommon—plan to maintain a squeaky-clean literature, Molecular and Cellular Biology has picked through its archives from the past several years to find troublesome figures, duplications in particular. Last month, the journal began to publish the first retractions and corrections to shake out of this quality-assurance effort”.

Want to know what all those corrections in Molecular & Cellular Biology are about? I found out: https://t.co/VtyW9STdxo @TheScientistLLC

This does not really fit the image painted for MCB by Retraction Watch, does it? No other journal screens own past publications, i.e. without being prompted to by some PubPeer- or other externally submitted evidence; at least this is he situation that I am aware of. Other journals, like EMBO Journal and Journal of Cell Sciences screen current manuscript submissions, often only focusing on those which are about to be accepted. MCB is apparently unique in this attitude to screen papers retrospectively on their own accord, and should be applauded as trailblazer, instead of being falsely lambasted as a kind of fraud conspirators.

I reached out to the journal’s editor-in-chief, Davis. This is how he explains the current MCB policy:

“Regarding our retrospective screening of MCB papers.  This was done for two reasons.  First, we believe that our past post-acceptance / pre-publication screening found many problems, but often missed image duplications because they are hard to find.  We have corrected this with new procedures and we therefore wanted to identify and correct the problems we had missed.  If you look at the Corrections / Retractions that are being published in MCB, you will note that most involve duplications and have not been highlighted on Pubpeer (this second point was noted by The Scientist).  Second, we have been doing post-acceptance / pre-publication screening for about 5 years now.  We thought that our retrospective analysis would provide insight into whether there were any trends over years concerning the prevalence if image problems.  Our hope has been that post-acceptance / pre-publication screening would result in at least some level of author education”.

On the issue of the 6 year limit, Davis commented to me:

“Regarding the ORI [US Office of Research Integrity, -LS] statute of limitations.  We consider all allegations very seriously.  Those made within 6 years of publication are immediately investigated, consistent with the ORI statute of limitations.  When we see evidence for gross image manipulations, such as a pattern of repeated problems, we also examine papers beyond the 6 year limit (both papers brought to our attention and papers that we identify).  This is an ASM policy – not a policy of MCB – and has been in place for many years.  It is clearly stated on the web site.

Investigation of image issues in old papers is problematic because the original data is most often not available, high resolution files are not retained by the publisher, and we are left with only published images to examine.  I would also point out that institutional investigations are a critical aspect of our procedures and that institutional investigations (at US institutions) are also governed by ORI guidelines.  For these reasons, we do investigate old papers, but prioritize for action those papers where we see evidence for gross image manipulations, such as a pattern of repeated problems”.

The MCB editorial was in fact prompted “because many Corrections/Retractions were to be published”, explains Davis. Not as a sinister announcement to cover up fraud (unlike it was apparently made by Cell in 2015, see here and here). The MCB editor and the publisher ASM were obviously shocked by what Retraction Watch (RW) made of their editorial. Davis wrote to me:

“RW choose to publish an article based on our editorial with a sensational title – I assume designed to be click-bait for trolls – that was both false and also completely ignored our efforts to clean up MCB (which was the purpose of our editorial – note its title!).  RW smeared us by stating (without any evidence) that we will ignore comments from Pubpeer (etc); indeed, we explicitly state in the editorial that we follow up on Pubpeer comments.  Based on this false reporting, ASM posted a complaint (see comment thread).  In response, RW changed the title of the article.  You would not know this because the acknowledgement of the change is hidden in the comment thread and there is no obvious link the previous version.  Moreover, I note that RW does not focus on the “news” in our editorial – that we are making major efforts (most likely not done by any other journal; see The Scientist article) to clean up MCB.  RW therefore leaves the reader both mis-informed and uniformed”.

Linked is the ASM comment under the Retraction Watch article, and this is how they replied, represented by staff writer Alison McCook:

“Thanks for the clarification. We’ve updated the headline”.

No apology. And the main accusation remains.

A confused article about Wellcome's new journal–if it offers formal peer review, it is not a preprint server https://t.co/48PgwnF8Iw

It is not the first time Retraction Watch founders, the research integrity authorities and watchdogs Ivan Oransky and Adam Marcus, baselessly lambast an academic publisher which was actually trying to improve the state of research communication. In my earlier article, I was trying to understand what led them to set upon Wellcome Open Research, the new free-to-publish open access publishing platform of the UK funder Wellcome Trust, which was specifically set up to publish negative, contradictory or seemingly insignificant research results which normally never leave the file drawers. For example, though this journal publishes in the post-publication peer review mode, Oransky declared it to be a non-peer reviewed preprint server, and refused to back down on that claim(see this watchdogs STAT article). Just like the situation now is on the accusations against MCB and ASM. The unjust negative publicity is their own problem now.

These are the errors and baseless speculations I've asked @schneiderleonid to correct: https://t.co/2vw1B2DR7S https://t.co/tVndzEAykm

It is also not the case that Oransky and Marcus are generally sceptical towards academic publishers. In their regular column in the medicine magazine STAT, they recently awarded a so-called “Doing The Right Thing” Award to the American Diabetes Association (ADA), for retracting papers of the notorious Brazilian western blot breeder Mario Saad and one paper of the German diabetes researcher Kathrin Maedler. There are actually quite a number of problematic Maedler papers in the ADA journal Diabetes, which ADA has so far done very little about. But the problem with that publisher is: they do not always are Doing the Right Thing. Right after getting prized by Retraction Watch, ADA has been bullying its own 2017 meeting’s participants for tweeting photographs from the conference, and demanding that they delete their tweets. One can only describe this as censorship, not really the right thing to do.

Hi Juan, thanks for joining us! Photography isn't allowed during #2017ADA presentations–we'd appreciate it if you would delete this tweet.

“The policy, unusual for scientific conferences, is the most public manifestation yet of the tension between the drug and medical device companies that help sponsor the ADA’s flagship programs on one side and researchers and patients on the other”.

“Leaders of the ADA decided that the ideas, the facts, the science presented in San Diego must stay in San Diego, only later to be doled out in allotments and framing deemed acceptable to the $160-million-strong organization”.

Retraction Watch, who usually readily report on twitterstorms and other controversies regarding academic societies and publishers, wrote nothing at all about the accident with their Doing the Right Thing award winner ADA.

19 comments on “Journal announces to clean up past literature, gets “smeared” by Retraction Watch”