Recent news brought us yet another retraction of the Spanish zombie scientist Susana Gonzalez, formerly famous for her impactful ERC-funded research into stem cells and ageing. It is her fifth retraction (others here), and meanwhile Gonzalez is not even a zombie scientist anymore. She has no research group in her new Madrid institute, noone in Spain wants to work in the same building with her, in fact though she is still formally employed with the Spanish Consejo Superior de Investigaciones Científicas (CSIC), it seems she stopped coming to work long ago, being on an endless sick leave. Even the European Research Council (ERC), usually most accommodating with research misconduct of their elite grant recipients, didn’t know what to do with Gonzalez suspended €2Mn grant and eventually terminated it.

The recent Gonzalez retraction at the  Molecular and Cellular Biology (MCB) is interesting in two aspects. First, Retraction Watch previously chastised the journal in a headline for allegedly refusing to investigate evidence of data manipulations in papers older than 6 years (read here). No reference is made to that “smear” accusation in the current Retraction Watch article on Gonzalez retraction.  But the second aspect is really much more intriguing. The retracted MCB paper, from Gonzalez period as postdoc at the Memorial Sloan Kettering Cancer Center (MSKCC) in New York, was coauthored by the US researcher Carol Prives, professor at the Columbia University in New York, and specialist for the cell cycle control protein p53:

p73α Regulation by Chk1 in Response to DNA Damage

#retraction in mol cell biol for tampered images. @pubpeer users were on it 4 YEARS AGOhttps://t.co/xhCjUKsTczhttps://t.co/HdQPwPyzdq

“After publication, this article was found to have problematic figures. Digital experts have informed us that some of the published data in this paper were very likely digitally manipulated. This represents a major deviation from established scientific standards for publications, and therefore we retract this paper. We apologize for these errors”.

Well, who did those manipulations? The middle author Prives told the Spanish newspaper El Pais:

“Other study’s co – author in the US, Carol Prives, head of a laboratory at Columbia University, did talk to us and recanted:  “I knew nothing about the experiments and manipulation of data in the study of González and others. And I’m convinced that Carlos Cordon-Cardo had absolutely nothing to do with making up data,” says Prives, who is also a world leader in basic cancer research. For this American scientifist, manipulation of study that she co-authored in 2003 is “obvious””.

Prof Prives, elected member of National Academy of Sciences and Fellow of AACR, now an innocent victim of other’s misconduct? Maybe. However, I was contacted by the well-known data integrity sleuth, the pseudonymous “Claire Francis“, whose evidence over years damaged or even stopped many cheater careers in science. Claire Francis alerted me to the evidence he (or she, if you prefer) posted on PubPeer regarding papers by Prives which Gonzalez had absolutely nothing to do with. In particular, Claire Francis sent me this evidence:

p53 accumulates but is functionally impaired when DNA synthesis is blocked
Proceedings of the National Academy of Sciences (2001) doi: 10.1073/pnas.98.3.1036

There are more issues in this paper and there are more Prives papers flagged on PubPeer. The list includes yet another MCB paper from Prives lab, Li et al 2009, where gels were assembled from pieces in a most inappropriate fashion:

There are more papers by Vanesa Gottifredi (now group at Fundación Instituto Leloir in Buenos Aires, Argentina) on Pubpeer, some with Prives, some without. Did Prives know of those things? She seemed rather naive with Gonzalez, so who knows.

This paper Kass et al 2007, in Journal of Biological Chemistry (JBC) has neither Gonzalez nor Gottifredi on it, but Prives is again last and corresponding author: 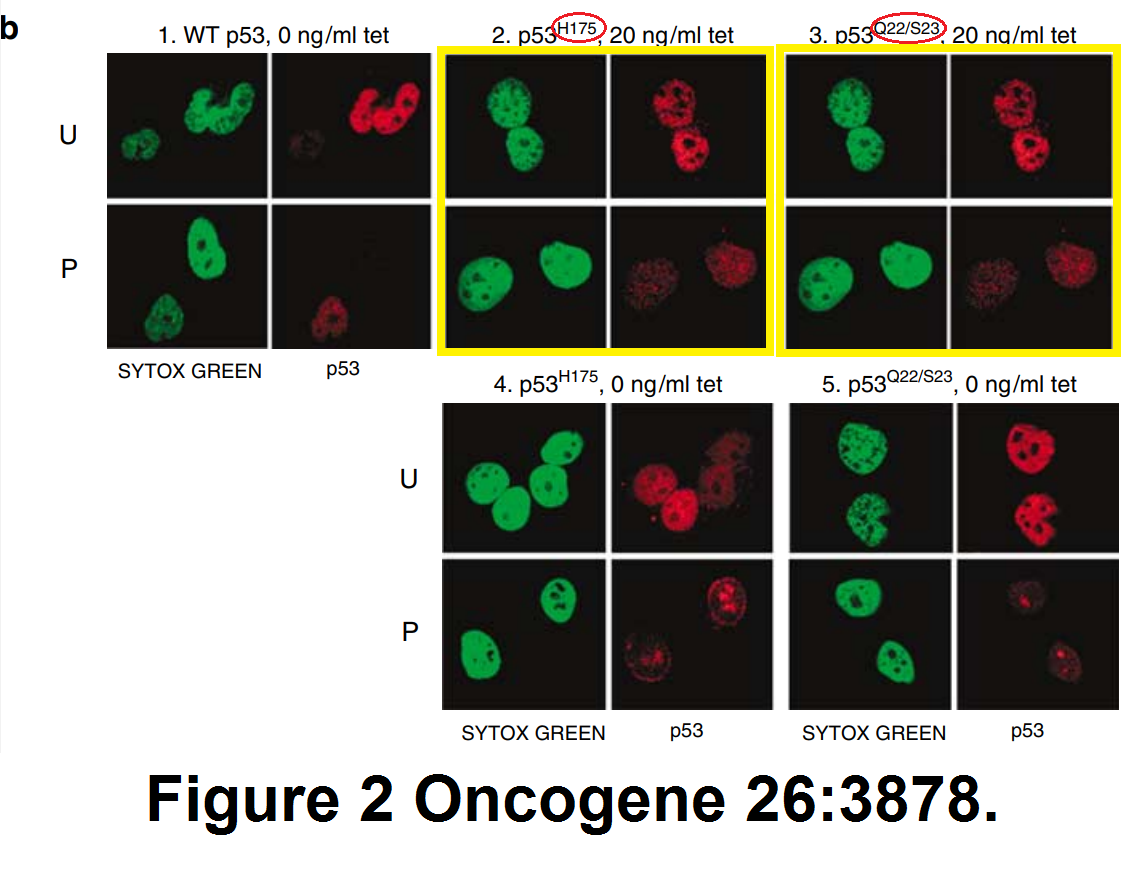 Question is now: did NAS Member Prives know anything about these suspected manipulations in her lab’s papers? And how will journals act on the evidence?

Spanish media however might be well advised to stop beating the dead horse of data manipulation of the finished-off zombie Susana Gonzalez and focus on the neglected problems with the Iberian research, as evidenced by publications of Pura Munoz-Canoves, Sonia Melo, Manel Esteller and of course Maria Pia Cosma. Those are just select Iberian elite scientists featuring on my site, PubPeer has much more.