More trouble for the German stem cell and DNA damage researcher Karl Lenhard Rudolph (not to be confused this Christmas season with Rudolph The Red-Nosed Reindeer), after his own Leibniz Society found him guilty of misconduct in 8 papers and forced his resignation as director of the the Fritz-Lippmann-Institute (FLI) in Jena (read here). Before that, FLI he used to head was raided by the police for suspected animal abuse, and forbidden to perform any mouse experiments. Today the central German funding agency DFG issued a press release declaring that Rudolph received a written reprimand for data manipulation in 3 of his recent papers, and was barred from DFG funding for 2 years. As usual in Germany, no investigative reports were released, we know no details or which papers or which data is affected. The DFG assures that Rudolph was only responsible by failing to provide oversight, and that no data was faked anyway, though the previous Leibniz Society investigation determined the loss of original data and lab books.

This is also probably why Rudolph is still welcome at the ISSCR Annual Meeting 2018, to take place on 20-23 June, 2018 in Melbourne, Australia, where he is even listed as Plenary Speaker, for some reason under his very much outdated affiliation of the Hannover Medical School MHH (amazing university btw, read more here). Rudolph also used to be listed as invited speaker at the prestigious Keystone Symposium “Pushing the Limits of Healthspan and Longevity“, to take place also in Hannover, on April 15th -19th, 2018, but then something strange happened and Rudolph’s name was removed from the programme. Never mind, for Rudolph set up his own meeting, at FLI in Jena, and almost everyone who counts is coming to show support.

“We stand with Rudolph” Conference?

Rudolph’s peers will be flocking to his conference in 6th-8th 2018, set up and funded solely by the FLI which he used to be director of and where he is now just a humble group leader. The guest list reads as who-is-who of the DNA damage, ageing, cancer and stem cell research, including my own former boss from my postdoctoral stay in 2008-2012 in Milan, Italy (they recently corrected a common EMBO J paper). Some chose not to accept the invitation, or rejected it once they learned of the misconduct findings. To compensate, the Spanish PubPeer-star Pura Munoz-Canoves (read more here) was invited, who despite all the manipulations in her papers keeps receiving faculty promotions, awards and even €2 Mn ERC funding, while all Rudolph gets is a demotion and a funding ban.

Some were not able to attend, other changed their mind when they learned about the Leibniz misconduct investigation. Jens Brüning, director at the Max Planck Institute for Metabolism Research, declared to me:

“I had informed the organizers, that I couldn’t attend, and accordingly, you will not find me on the list of speakers”.

Ian Hickson, Director of the Center for Chromosome Stability in Copenhagen, Denmark, is still listed is as invited speaker. Yet this is what he wrote to me:

“The issues in the FLI were not a consideration at the time, because I was invited before they became public.  I will await further developments before deciding whether to attend, such as whether Prof Rudolph were to be removed from his position [as group leader, as Hickson later clarified to me, -LS] in the FLI. The conference is not dependent on the presence of Prof Rudolph”.

Jan van Deursen, Professor of Biochemistry and Molecular Biology at Mayo Clinic, Rochester, Minnesota, US, was unaware of the misconduct findings. He then wondered in his email to me if ” the meeting should be cancelled or organized by someone else” and considered to “withdraw from the meeting at this point because of issues with Drs. Rudolph and Canoves”.
Others I contacted apparently did not mind the Leibniz misconduct findings against Rudolph at all. Most didn’t reply, despite two reminders (I didn’t contact my ex-boss, you are welcome to if interested). Those were the replies I got otherwise:
Eric Gilson, director of the Institute for Research on Cancer and Aging in Nice, France, declared:

Emmanuelle Passegué, Professor of Genetics & Development at Columbia University in New York, US, when asked if she intends to support the conference organiser Rudolph by attending the meeting, replied with following:

“You are making assumptions which is not ethical for a journalist. I don’t know you or what you represent. please use no responses when referring to me”.

So, at this Jena conference in September 2018 it is myself who is seen as unethical, for reporting the Rudolph misconduct finding decisions of the Leibniz Society and now of DFG. This is unfortunately how scientific community at large ticks. It will readily forgive any excess of research misconduct and much worse, but it will mercilessly punish whistleblowing and ostracise those who fail to publish in high-impact journals.
Who funds the Jena conference? After all, as I learned the travel and housing expenses of this conference’s participants are covered by the organiser, and these guests of honour also need to be fed and entertained. The meagre registration fee won’t cover it, especially if it is unlikely many guests will register.  The Else Kröner-Fresenius-Foundation, which used to fund FLI conferences since 2008, is not paying this time, as they informed me. Neither is the other usual supporter, the Aging Research Center Jena.
The Leibniz Society, despite being acknowledged as organiser on the poster, also gives no funds, and declared to me:

“the event you mentioned is a conference in the sole responsibility and sponsorship of the Fritz-Lipmann-Institute”.

Thus the meeting is indirectly funded by the scientists working at FLI, because their research budget is now being used to host a “Support-Lenhard-Rudolph-Conference“.

This is the DFG decision, unofficial English version based on Google Translate:

The German Research Foundation (DFG) again draws consequences from a case of scientific misconduct: The Board of the largest research funding organization and central self-administrative organization for science in Germany now decided in Bonn upon measures against the researcher of ageing and Leibniz Prize winner Prof. Dr. med. Karl Lenhard Rudolph according to the DFG Rules of Procedure for dealing with scientific misconduct.

Rudolph, who works at the Leibniz Institute for Aging Research – the Fritz Lipman Institute (FLI) of the Leibniz Association in Jena, was given a “written reprimand” and “an exclusion from the eligibility for two years”. Thus, the main committee followed a recommendation of the DFG committee to investigate allegations of scientific misconduct.

In 2016, the DFG launched an investigation against Rudolph after being charged with allegations of data manipulation in a publication in which Rudolph was last author. At the same time, the Leibniz Association initiated a review during which the DFG procedure was initially suspended. This procedure was completed in June 2017 with the discovery of a scientific misconduct and the statement of several measures against Rudolph by the Presidium of the Leibniz Association.

With the decision of the Board, the DFG investigation against Rudolph has now been completed. The DFG committee for investigating allegations of scientific misconduct on the basis of several written statements by Rudolph, the final report of the investigation of the Leibniz Association and a personal interview with Rudolph, came to the conclusion that three DFG-funded publications contain incorrect figures. Rudolph was responsible last author and corresponding author of these publications and should have been able to recognize the faulty images, what he also has admitted in the investigation himself.

As a suitable and appropriate measure in accordance with the DFG Rules of Procedure for dealing with scientific misconduct, the Committee of Inquiry therefore proposed to the Board a “written reprimand” and “the exclusion of the eligibility for two years”, which then was accepted as final decision. “This will take into account Mr. Rudolph’s failures in a suitable manner,” said the chairman of the committee of inquiry, DFG General Secretary Prof. Dorothee Dzwonnek, after the decision of the Board.

Update 21.12.2017. I received a statement of ISSCR president, Hans Clevers, professor of Molecular Genetics at the Utrecht University, Netherlands:

“At the ISSCR, we are aware of these incidents. We have discussed the issues and -given the disciplinary steps that have already been taken in Germany and that have been widely communicated- we have decided that we should not change the speaker status of Karl Lenhard Rudolph in Melbourne”.

Update 9.03.2018. Rudolph is not listed as plenary speaker at ISSCR 2018 anymore, his slot was given to Merav Socolovsky of University of Massachusetts Medical School, USA.

Update 23.05.2019. Rudolph is again acting as speaker at prestigious research symposia, just in March 2019 he spoke at Stem Cells and Cancer Gordon Research Conference in California. He never retracted a single paper. Not even all corrections were implemented. Here is the modified list of investigated Rudolph papers which the Leibniz Society originally provided to Retraction Watch. The Missios et al Nature Communications 2014 paper was never corrected despite DFG announcement. 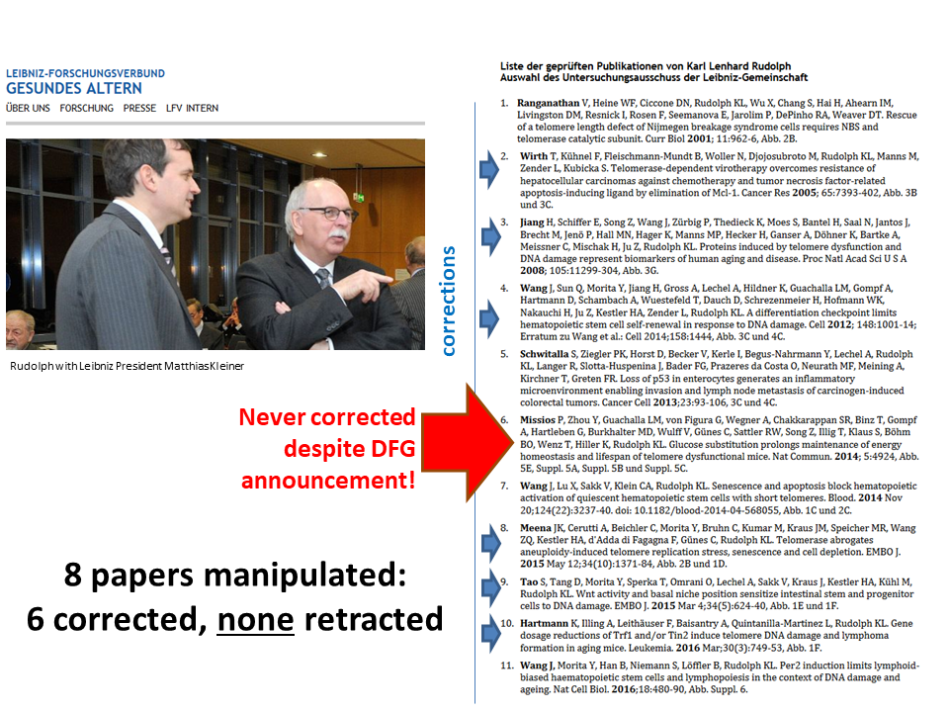 Disclaimer: in my past as stem cell researcher, my work overlapped at some point with that of Rudolph in what can be considered as a scoop, that paper Wang et al Cell 2012 is on the Leibniz list of investigated papers and also one of 3 DFG-investigated papers. I also once unsuccessfully applied for a faculty position in Jena where he was selection committee member. LS.

12 comments on “Karl Lenhard Rudolph barred from DFG funding for 2 years, as supportive peers flock to his conference”