On 7 April 2010 the Spanish diabetes researcher Margarita Lorenzo, Professor of Biochemistry at the Complutense University in Madrid, died of metastatic melanoma, aged only 51. Two months after her death, Lorenzo’s colleagues submitted a paper to the journal Diabetes (published by American Diabetes Association), which was accepted for publication 4 weeks later. These colleagues, primarily the corresponding authors Sonia Fernandez-Veledo (now research group leader at IISPV in Tarragona) and Cristina Murga (now deputy director at CBMSO in Madrid), wrote in the paper’s acknowledgements:

The paper, which studies the mechanisms of obesity and insulin resistance, seems to be full of manipulated western blot data. The only thing which is rather clear: the late Margarita Lorenzo didn’t do it. While she was dying of cancer, her colleagues advanced their careers using her reputation, using their own disreputable Photoshop skills. This shows too many uncanny parallels with another case in diabetology research, where some unscrupulous scientists at Weizmann Institute in Israel urinated on the grave of their dying colleague, by placing manipulated western blots into his last papers. That scientist was Ofer Lider, and he died of cancer (leukaemia) at 49, a similar age as Margarita Lorenzo. Obituaries were written by those responsible for the publishing of rigged research, in both cases.

This is the publication dedicated to the memory of Margarita Lorenzo:

Several of the co-authors were established members of Lorenzo lab. Shared co-first-authors Garcia-Guerra and Nieto-Vasquez joined as PhD student in 2006 and as postdoc in 2003, respectively. The corresponding author Fernandez-Veledo arrived in 2004 and took over the lab leadership after her PI’s death. The other corresponding author, Murga, was at the time already professor at Universidad Autónoma de Madrid.

And here is what data integrity sleuths Clare Francis and others found in that paper, namely duplicated western blot bands:

Not just in one figure. Also the Figure 6G contains evidence of duplicated gel bands and inappropriate splicing, while same loading control was apparently used trice, for 3 utterly unrelated sets of samples. Without correct loading controls, but with duplicated bands the entire paper loses credibility.

There is even more (visit the relevant PubPeer site), even lazy careless duplications like in Figure 1 or in Figure 3: 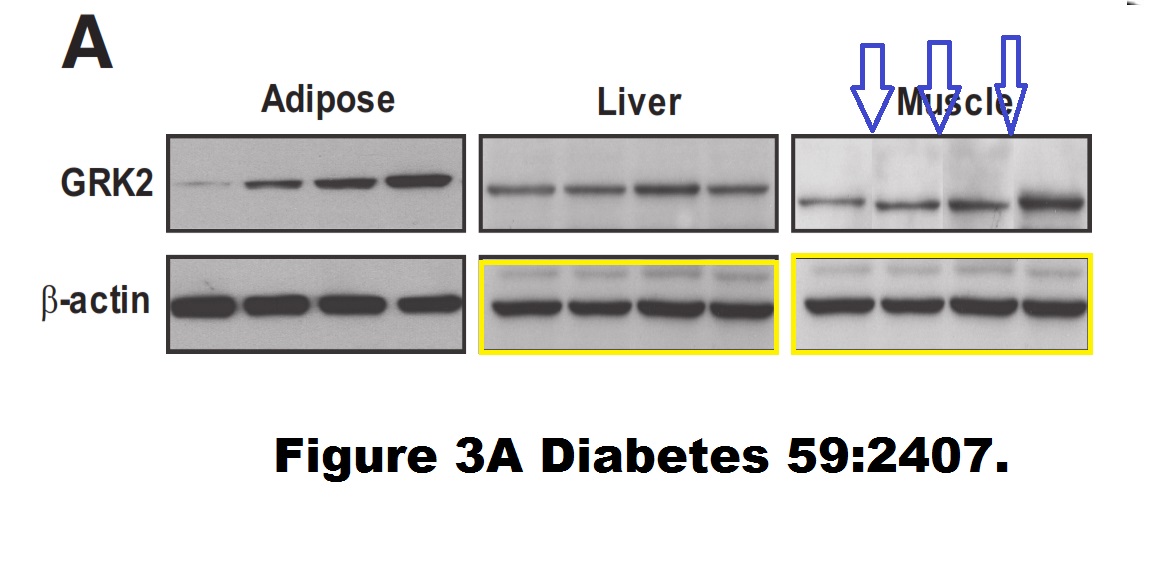 Also there we find some apparent microscopy image and gel band duplications, as discussed on PubPeer. For example:

In 2008, two years before Margarita Lorenzo died of melanoma, this paper was published:

Among other issues, it contains what looks like a set of meticulously duplicated gel bands, hidden by rearrangement, mirroring and stretching. Who did that?

Same names keep popping up, and the only thing certain is that the legacy of the late scientist Margarita Lorenzo is tainted by such evidence of data manipulation.

The successor Fernandez-Veledo authored an obituary on her former PI, which was published by the journal Archives of Physiology and Biochemistry where Lorenzo used to be editorial board member of:

“All of those who had the chance to meet and interact with Margarita along her brilliant scientific career (as member of the COST and other collaborative research networks or as an active participant in international meetings) were impressed by her rigorous and talented scientific contributions in the field of insulin resistance, her contagious energy and enthusiasm and the way she enjoyed both science and life. In addition to her scientific legacy, we will always remember Margarita’s courage during her final months”.

Also the Spanish main daily El Pais published an obituary. Its first author was Manuel Benito, professor at the same Complutense University as his late colleague Lorenzo. Benito has his own lengthy PubPeer record of duplicated gel bands, some of his flagged papers were co-authored by one in this respect even more notorious US researcher: C Roland Kahn. An example from the Benito lab, Valverde et al Diabetes 2003, which happened without any input from Kahn: 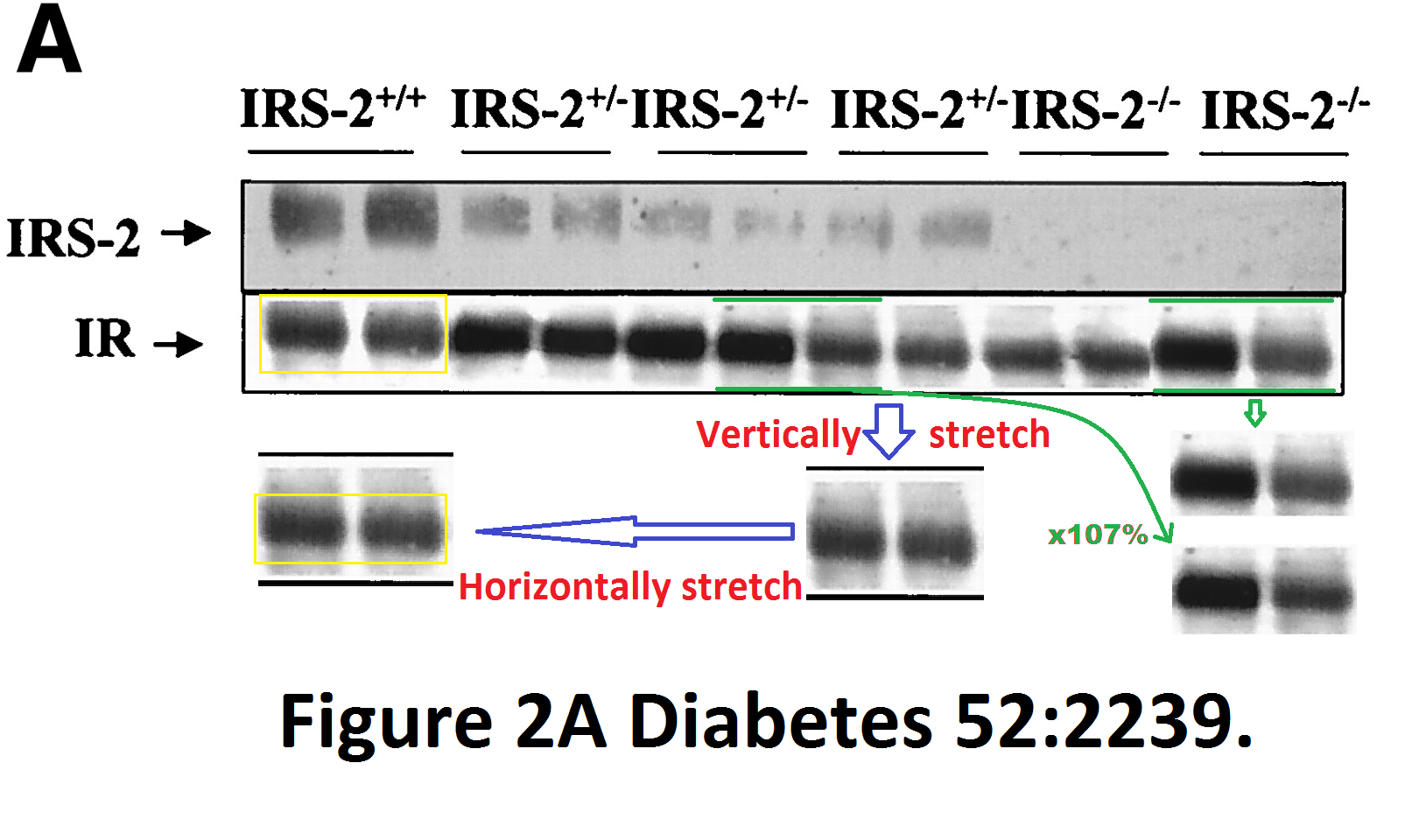 Another co-author of the El Pais obituary and the Garcia-Guerra et al Diabetes 2010 paper dedicated to the memory of Margerita Lorenzo, is Federico Mayor, professor at Universidad Autónoma de Madrid and former director of Centro de Biología Molecular “Severo Ochoa” (CBMSO), where Cristina Murgas is now deputy director. Would you like to see a sample of the kind of science Mayor and Murgas published together?

Here you go. This is just one example from Peregrin et al, Current Biology 2006. Murga is last author, Mayor penultimate and corresponding author. The coloured boxes show where the images of cells in a dish were accidentally duplicated, while zoomed out, to stand in for utterly separate cells populations.

After having been informed how Ofer Lider’s name was besmirched with manipulated data his co-authored placed in his papers, Weizmann Institute quickly performed a misconduct investigation. Two papers have already been retracted for data manipulation, more might follow. Maybe the Complutense University in Madrid will now do the same to clear Margarita Lorenzo’s name?

33 comments on “Another dead scientist framed with manipulated data?”