Nobody knows how Smut Clyde became obsessed with nanotechnology and materials science, but we do know why he can’t let go of it. This field of research is just too fraudulent. As Smut Clyde reveals here, it’s not just ridiculously fake figures – there are both Chinese papermills and citation cartels in operations, and our allegedly respectable publishes, primarily Elsevier, are eager partners in crime. It’s clear nobody was peer-reviewing or even reading anything, that’s how fake and dumb those advanced materials “studies” are. It’s a strange combination of chickenshit, biofuels and Traditional Chinese Medicine.

Readers can be excused if the work of C. Zhao and colleagues on foliage waste and biofuels is not central to their interests. It is enough to know that someone is trying out different ways of predigesting leafy agricultural byproducts to break down the lignin and liberate the sugars for fermentation, so we don’t have to. Hydrogen peroxide, ammonia, pre-soaking, composting with chickenshit.

But other scientists do take an interest in this trail that Zhao et al blazed into terra incognita… a remarkable number of people, with eclectic specialities. Theoretical chemistry, petroleum engineering, perovskites, phytopharmacology, surface coatings. Zhao’s papers attract hundreds of citations from a heterogeneous audience, and this is what did pique my interest, indirectly.

In a series of acts of creative misapprehension, which I choose to label with the deconstructionist term ‘misprision’ because it sounds fancier, a stream of phytopharmacologists convinced themselves that Zhao’s studies were really about processing traditional herbs to maximise the extraction of active ingredients. Twenty-one research teams even independently embedded their bogus citations within identical passages. Another 12 papers in the list used different wording.

Now as a general rule, if the practitioners of Traditional Chinese Medicine insist that composting herbs with chickenshit is an integral processing stage in their healing modality, I happily defer to their expertise. But I would dearly like to know who came up with the idea that preprocessing a toxic arsenical mineral (realgar, α-As4S4) with Zhao-approved treatments would liberate more of the realgar’s active herbal ingredient, which is to say ‘realgar’ (Ma et al 2021).

It is possible that some of these curious citations were simply copy-pasted from earlier papers by authors who didn’t bother reading the source material (probable, even); and that others were inserted by tyrannical reviewers, as a condition of the manuscripts’ acceptance and publication. But could Zhao fan-boys really be gatekeepers for 15 different journals?

“Maximum extraction” is also the general theme of a second group of authors who acknowledged their intellectual debt to Zhao’s seminal studies, for they specialise in ‘oil-well science’ and petroleum technology. The authors understandably make less of an effort to pretend that the references are relevant. Only nine papers (so far), seven of them in Arabian Journal of Geosciences.

Some authors are excluded from the list, for they included the obligatory Zhao references but smuggled them into the text under the rubric of “global energy shortage”, which earns them a special commendation for ingenuity instead.

Papers in this cluster are similar in arrangement and illustrations (which emerge from the same simulation packages), formulaic and template-driven as the authors work systematically through all possible combination of nanosheet substrate + dopant + gas or ion. Evidently a few random references to foliage maceration are part of the template.

“Among the 2D dichalcogenides, MoS2 few-layers have been demonstrated to be promising materials for a large range of applications [20–27].”

For variety, these are mingled with other absurdly irrelevant citations:

“… monolayer MoS2 has superior electronic properties and has been widely concerned in transistor fabrication and electron probe applications [6–15]“.

What is going on here? All is clarified by a contribution to a PubPeer comment thread, by “Oriensubulitermes inanis“:

step 1: you need to find an agent, who has and manages a pool of papers, you should pay the fee and put your papers in the pool.
step 2: in the future when you have a manuscript, you shall tell the agent about the title and the keywords, the agent would then tell you to cite some papers in the pool, and this is what you see here, these papers are not related to the topic but belong to a more broad topic like “materials science” “catalyst” etc, and it makes sense. The agents are not scholars, they are running a business.
step 3: after you have done this, in the future, your own paper would be cited by the other groups of authors in their papers. Since your papers are in the pool, the agent would request other groups in the pool to cite them as an exchange.
step 4: the agents would give you word that how many citations to your paper would be granted in a specific time frame, for example, in the next year 30 citations.

As predicted by Goodhart’s Law, no end of ingenuity has gone into ways of working the metric of citation indices, and this is the latest development. Readers are all aware by now that citations are how university administrators distinguish between staff who are doing valuable research, and those who are merely publishing inconsequential microphotographs of their toenail clippings. Citations bring promotion, and funding, or at least continued employment.

Even university management eventually realised that self-citations of your work, in your own papers, shouldn’t really count (“see ‘Toenail Clipping Microphotographs, Part 1’, S, Clyde 2018”). So people progressed to citation cabals among cronies, referring to each other’s work — “You scratch my log and I’ll roll your back”, or perhaps vice versa — until advances in citation-graph mining made those more detectable in turn.

Oriensubulitermes inanis is describing a more diffuse form of citation network, where no member needs to know any other members, and the beauty of it is the lack of tell-tale reciprocal links in the citation graph. Researchers in the network undertake to cite other members’ papers from the pool, in return for their own papers going into the pool to be cited by other, different members.

Of course citation manipulation networks don’t organise themselves; a broker spots candidates and invites them to join (for a small fee to cover administration). Some might regard this behaviour as the scholarly equivalent of Performance-Enhancing Drugs, but I prefer to think of it as a type of collective action, a kind of academic union. Solidarity, brothers and sisters!

“Finally, you will see that this is a carefully designed, un-trackable network. The agent gets the entrance fee to the paper pool from the scholars, the scholars get the reward of citations and the bonus, the research community and the institution get high due to the more highly cited papers, and the journals can also be benefited from the higher impact factor.”

The hallmark of a network would be a heterogeneous co-citing cluster — a cluster of papers brought together by their citational proximity (i.e. they refer to the same papers) although they have little else in common. But now I seem to have given away the twist ending. Writing scripts for M. Night Shyamalan movies is not for me!

And we haven’t even touched on all the sources of Zhao-related citations! It has been a while since the last blatantly-fraudulent electron-microscopy images, so here is some weapons-grade photoshoppery from “Magnetic properties and thermal stability of SrFe12O19/γ-Fe4N composites with effective magnetic exchange coupling” (Zhang, 2020):

Zhang (2020) comes from a worksheet of 40-odd papers in the nanotech / advanced-materials field, mostly published in Ceramics International, in which “citation here” slots in the text have been filled with papers from a familiar list… anti-corrosion coatings, bacterial and photocatalytic breakdown of industrial pollutants, persulphates, Fenton reactions, and of course biofuels. Over half of these feature results that were derived from the digital domain, rather than from reality. And authors were not independently resorting to Appearance-Enhancing Software to compensate for their lack of advanced-synthesis and electron-microscope facilities, for images in otherwise-unrelated papers turn out to be assembled from the same components. and the same style shines through them all. Here,

I could go on for there is enough material here for a whole post. If all the fake images come from a single source, it is probably also the source of the text. Unusually for a papermill, the clients are not just medical clinicians, but also engineering and physics staff from polytechnics and provincial universities, relying repeatedly on the millers’ services to keep their research funds flowing.

Anyway, this papermill provides its customers with higher-profile publications by plugging into a citation-manipulation network… the same one that elsewhere turns out to be working with the ‘Crystallography papermill‘.

If it weren’t for the resulting bogus References, I don’t know if its products would have been flagged at PubPeer. Of course the links between papermilling and citation manipulation lead both ways: Zhao’s biofuel canon is attracting attention because of the recurring chickenshit references in the crystallography papermill’s output (all embedded within a much larger citation economy).

Let me boast, in conclusion, that I was reading Zhao’s pre-processing papers while they were still known only to agricultural-bycatch-to-biofuels hipsters, before the authors sold out and started pandering to a broader audience.

But now I feel guilty about depriving the readers of other modalities of Figure fabrication, so here are some current / time graphs from “Electrochemical Sensor Based on Silver Nanoparticles/Multi‐walled Carbon Nanotubes Modified Glassy Carbon Electrode to Detect Cyanide in Food Products” (Zhang 2020): Figures 5a/b, and 6a. 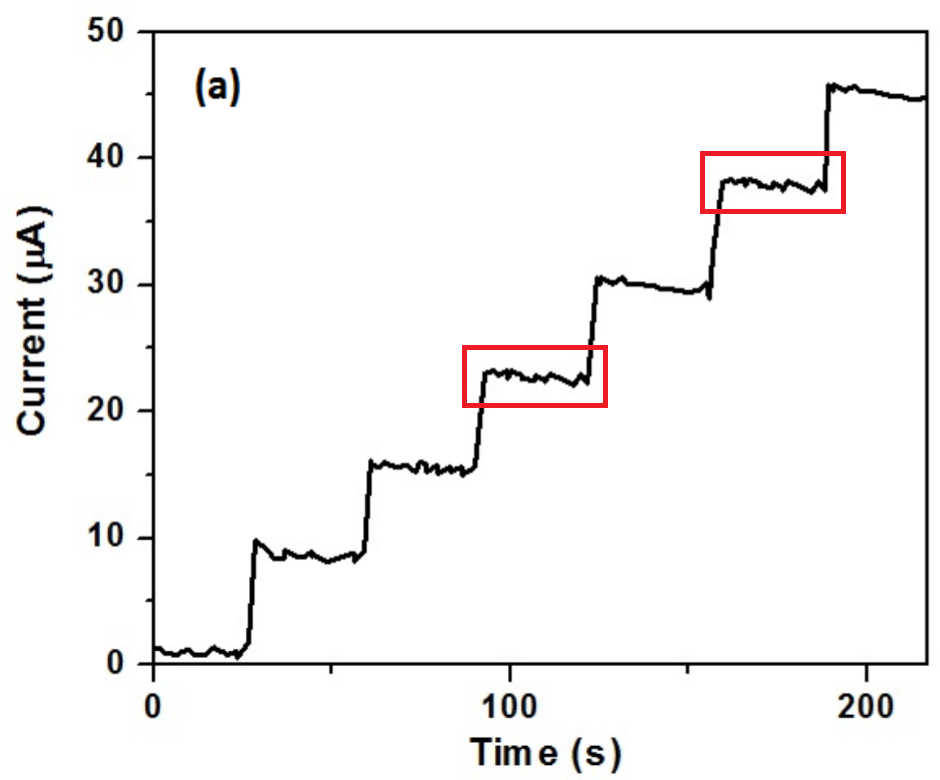 That paper belongs to a compilation of citation-payload papers from the Journal of Electrochemical Science. Their payloads of spurious citations do not include C. Zhao’s biofuel canon but many other old friends are there. That worksheet is very much a work-in-progress, for J. Electrochem Sci must have a policy of welcoming contributions from manipulation networks, and it is absolutely riddled with problematic papers; and for the same reason, I do not know if it will progress much further.

Yet another manifestation of the manipulation-network phenomenon is the Jun Zhao / Zhiqin Zheng corpus of 14 papers,  focussed on advanced materials, broadly but not exclusively on perovskites. I have written about their output already. As with a scorpion, the tail is the part that demands attention, and in a Zhao/Zheng paper the payload of citation is contained in the few final sentences (inserted as corrections at the proof-reading stage, and not seen by the journal’s reviewers).

If there were any vestigial element of rationality in the workings of academic administration, all this would convince the management to admit that their reliance on the metric of citations indices was all a dreadful mistake. Meanwhile the agencies that calculate those indices would recalculate everything to correct for cheating. I am not holding my breath.

If you liked Smut Clyde’s work, you can leave here a small tip of 10 NZD (USD 7). Or several of small tips, just increase the amount as you like (2x=NZD 20; 5x=NZD 50). Your donation will go straight to Smut Clyde’s beer fund

4 comments on “[Citation not needed]”