Another instalment from the series “Curing Cancer with Photoshop“. This time, the hero is Eric Lam, breast cancer researcher and professor of molecular Oncology at Imperial College in London. Lam’s lab consists by his own count of “12-18 researchers”, Imperial had to stress that it “is made up from 15 females”. However, a number of problematic papers from Lam lab have male first authors.

This cancer fighting hub at Imperial is funded by British national funders Medical Research Council (MRC), Cancer Research UK and Biotechnology and Biological Sciences Research Council (BBSRC). Major research focus is on the Forkhead Box proteins, in particular FOXM1, a transcription factor implicated in cancer development. A pedestrian approach many cancer researchers take, where similar-looking papers on slightly varying topics of the same gene are produced, none of them too unorthodox or earth-shattering to attract scrutiny as to how those results came to be. Lam’s science is not controversial for that, and with 250 papers it is the combined quantity and mediocrity which let his research stand unquestioned.  Yet if one does look closely, as the data integrity sleuth Clare Francis did and posted it on PubPeer, one finds duplicated western blot bands and irregularly spliced gels. Maybe it is a novel molecular pathway of FOX proteins, to be harnessed for a cancer cure?

What this article shows, is actually nothing scandalous. It is simply the boring banality of bad science in cancer research which PubPeer is full of. Lam is just one of many successful academic oncologists who knows what is needed to successfully publish papers in respectable society journals.

We can start with an early work from Lam lab, where Sunters et al J Biol Chem 2003 proved that FOXO3a and FOXO1a proteins are involved in apoptosis of cancer cells treated with a chemotherapeutic agent. Not really a surprising result, under the circumstances, but it still needed some tweaking. In a certain cancer cell line, this paclitaxel treatment had a bizarre effect of duplicating, or even triplicating gel bands inside the loading control. Apparently, an extracellular Photoshop-defence mechanism against undesired results gets activated, which then provides FOXO3a and FOXO1a phosphorylation in a tubulin-western blot band-dependent matter. Amazing science at the forefront of war on cancer at Imperial. 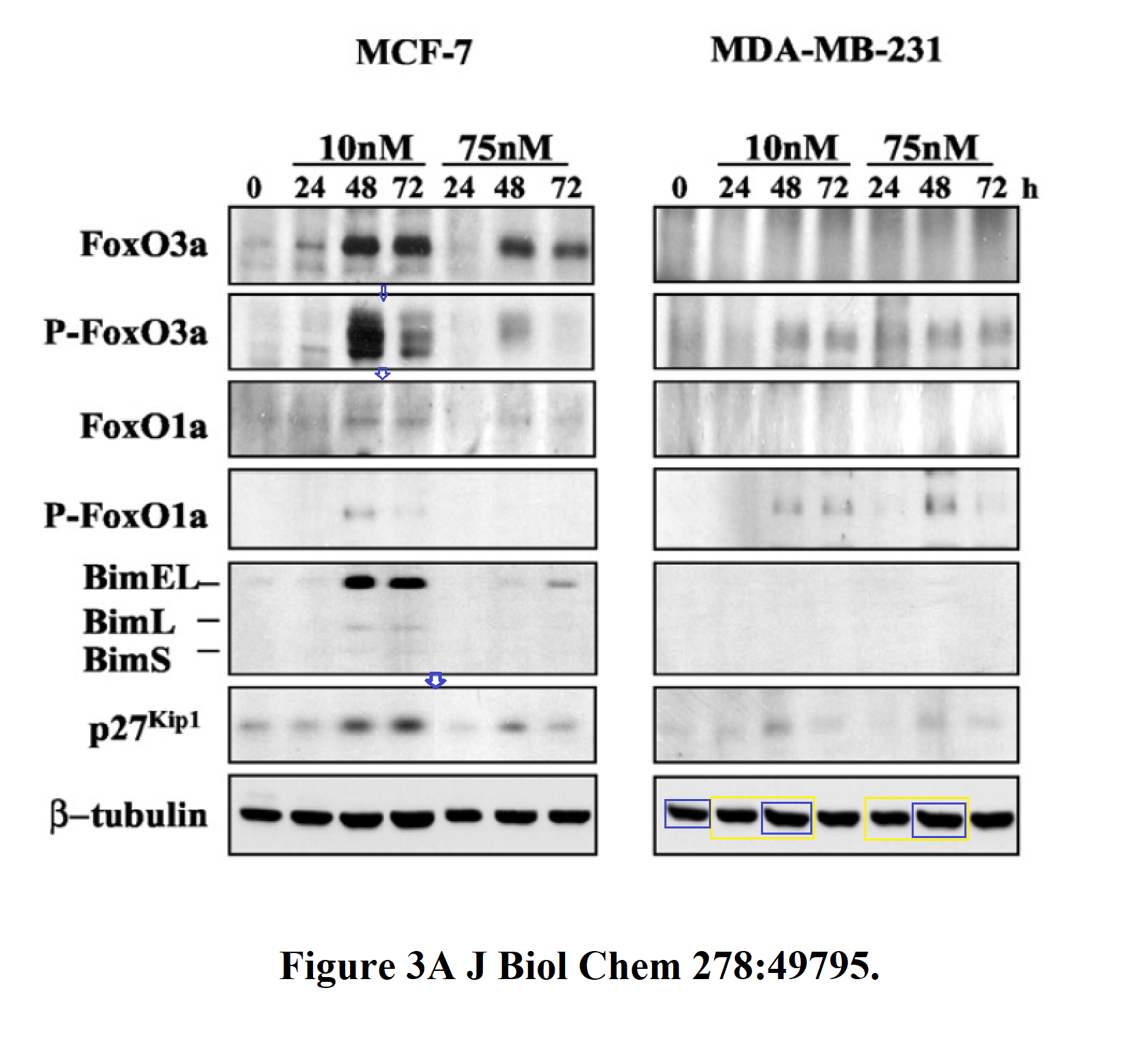 The Fernandez De Mattos et al, Mol Cancer Ther, 2008 paper from the Lam lab is also an interesting example in this regard. Who would have expected that the chemotherapeutic agent cisplatin will not only reduce the phosphorylation of FOXO3a protein, but also lead to a duplication of a p-FOXO3a gel band? Serendipitous discoveries like this is what drives cancer research!

Or this paper Francis et al, Int J Oncology, 2009, where Lam found out the key role of FOXM1 in breast cancer. The effect is that universal, that cancer cell lines produce identical western blots even when treated with utterly different pharmacological inhibitors, and in different publications. This is why two western blot panels from that paper are found in Mc Govern et al, Mol Cancer Ther, 2009, another Lam paper published by American Association for Cancer Research (AACR).

The effect spreads even further inside the McGovern et al 2009 paper. 4 loading controls were re-used, but not the fifth one because it apparently already was delegated to moonlight in the parallel Francis et al 2009 paper. 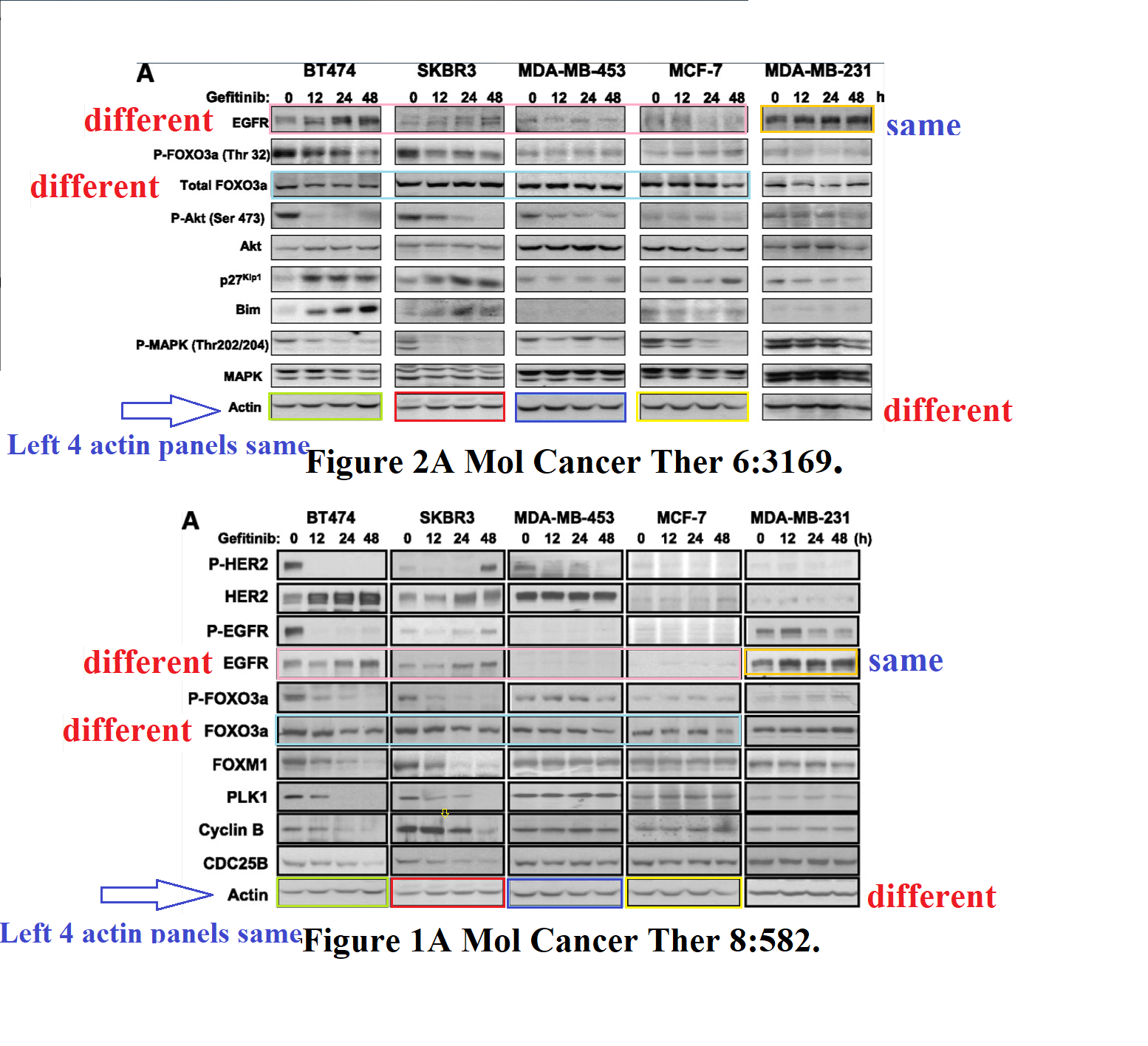 The following Lam study gives insights into his mentorship practice. Jimmy Kwok did his PhD udner Lam and is now head of London oncology division with the private healthcare provider HCA Healthcare UK. He is also a registered Ashtanga yoga instructor and helps cancer patients by selling them his books on yoga. There is lots for Kwok to mediate on himself though, for example on his paper  Kwok et al Mol Cancer Research 2010 and his PhD thesis from same year.

Can yoga explain that western blot bands showing the expression of an oncogene look identical between control and chemotherapeutic agent-treated cells? Especially that these gels bands were squeezed vertically to look smaller when the therapy began?

The exactly same figure, with same duplication, is present in Kwok’s PhD thesis, supervised by Lam. The thesis also has other issues, like those amazing reproducible flow cytometry plots, despite different time points: 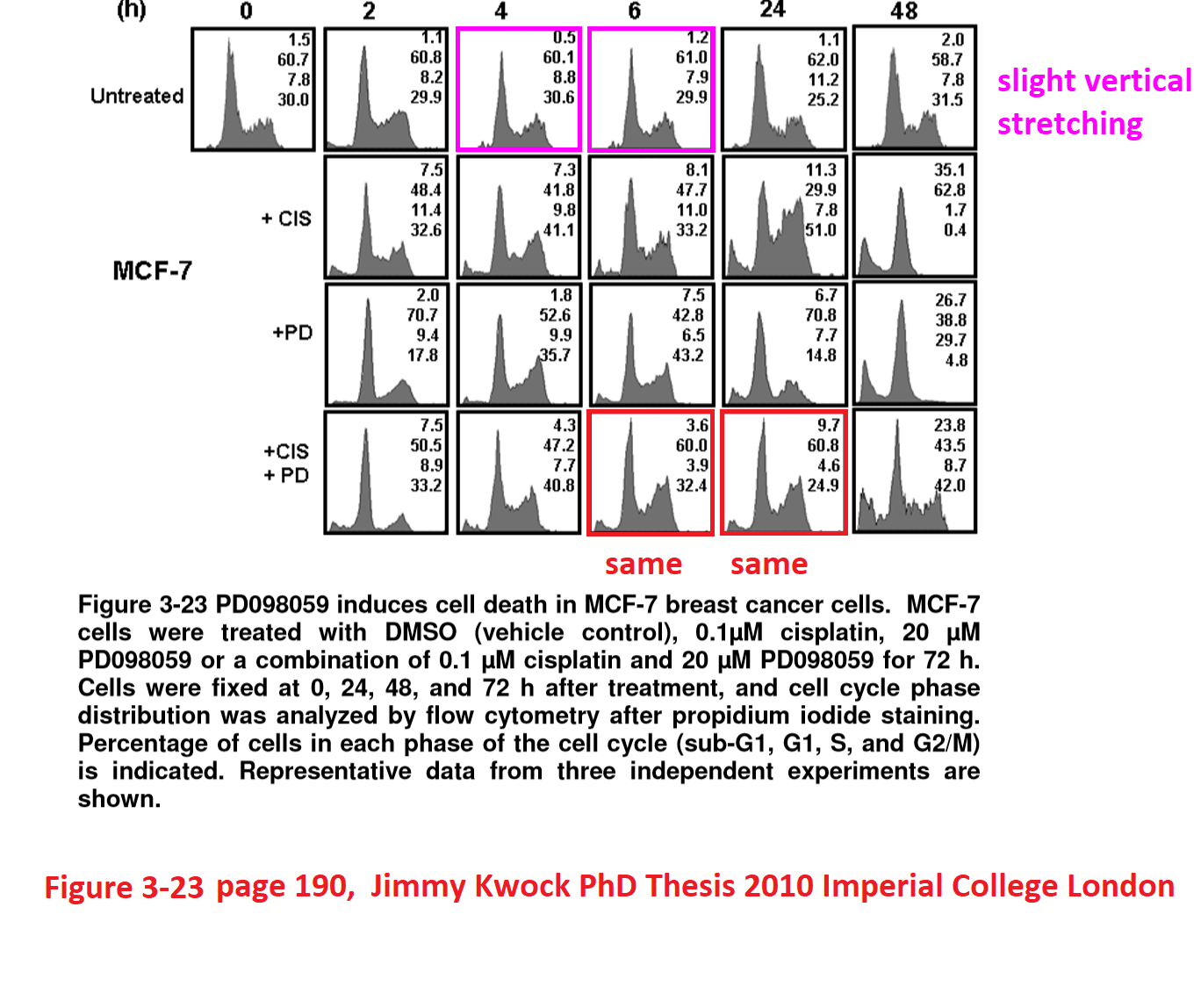 This was what Lam published together with another Imperial colleague, Simon Wagner (who is now with University of Leicester). The paper Batlle et al Mol Immunology 2009, published with Elsevier, proves that in the end, anything goes and nothing matters. Nobody cares, or looks, or actually peer reviews. Some brightness touch-up suffices to make results from different experiments interchangeable inside the same figure. Leukaemia solved, the easy Imperial way. 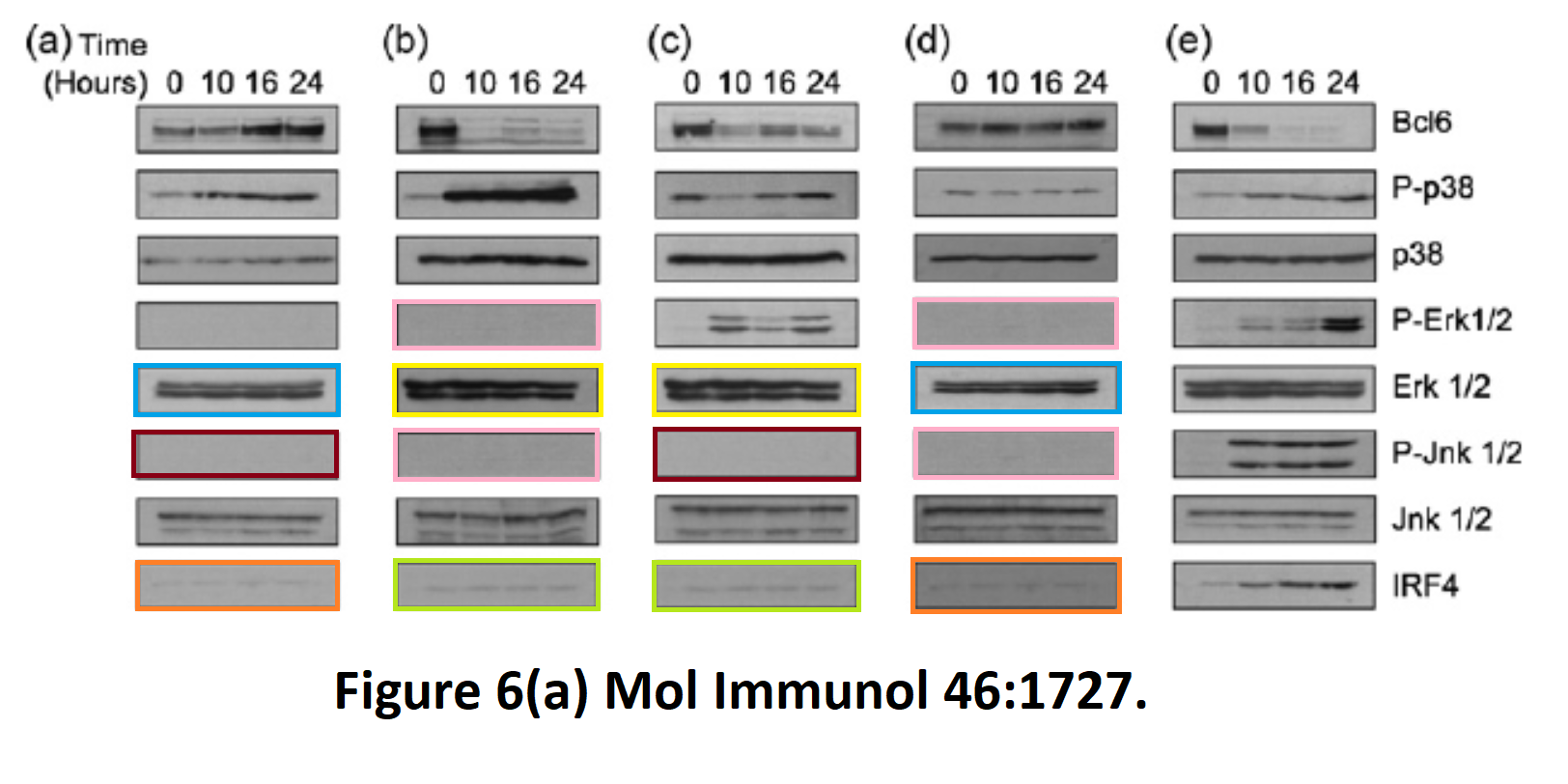 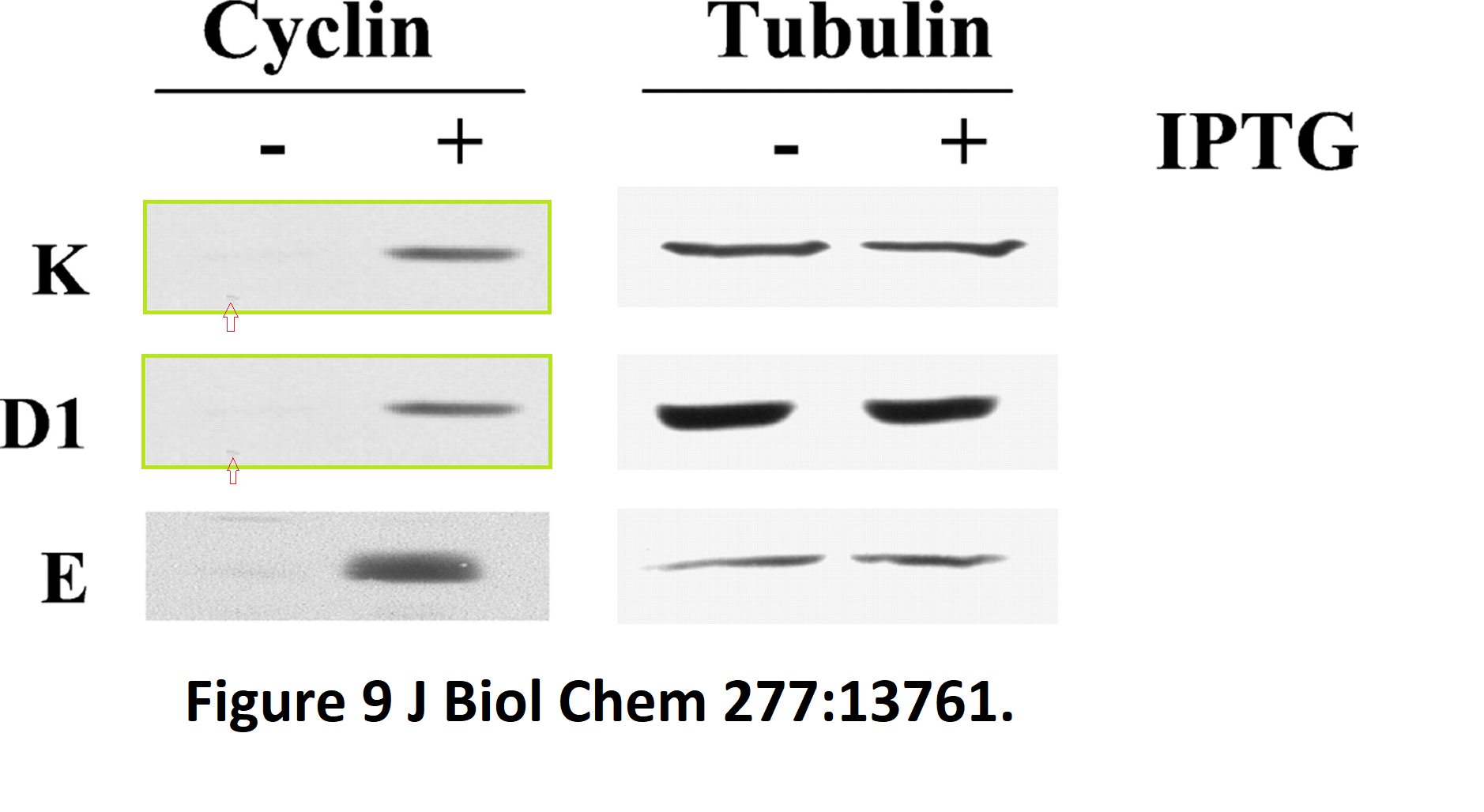 The bigger problem is that in cancer research, all these issues in Lam’s papers are nothing special. None of them. Those problematic western blots Lam published are boringly common. Just in UK, there are many other cases of photoshopped cancer research discussed on PubPeer, my site alone documents ICR London, Cardiff University , or even another lab at Imperial. Even more, Lam’s own superior Iain McNeish, Head of Division of Cancer of Department of Surgery and Cancer at Imperial published something rather inappropriate in his own youth, also at Imperial, in McNeish et al, Cancer Gene Ther, 2001. This is just one example of duplicated gel bands in that paper of his, more is on PubPeer. 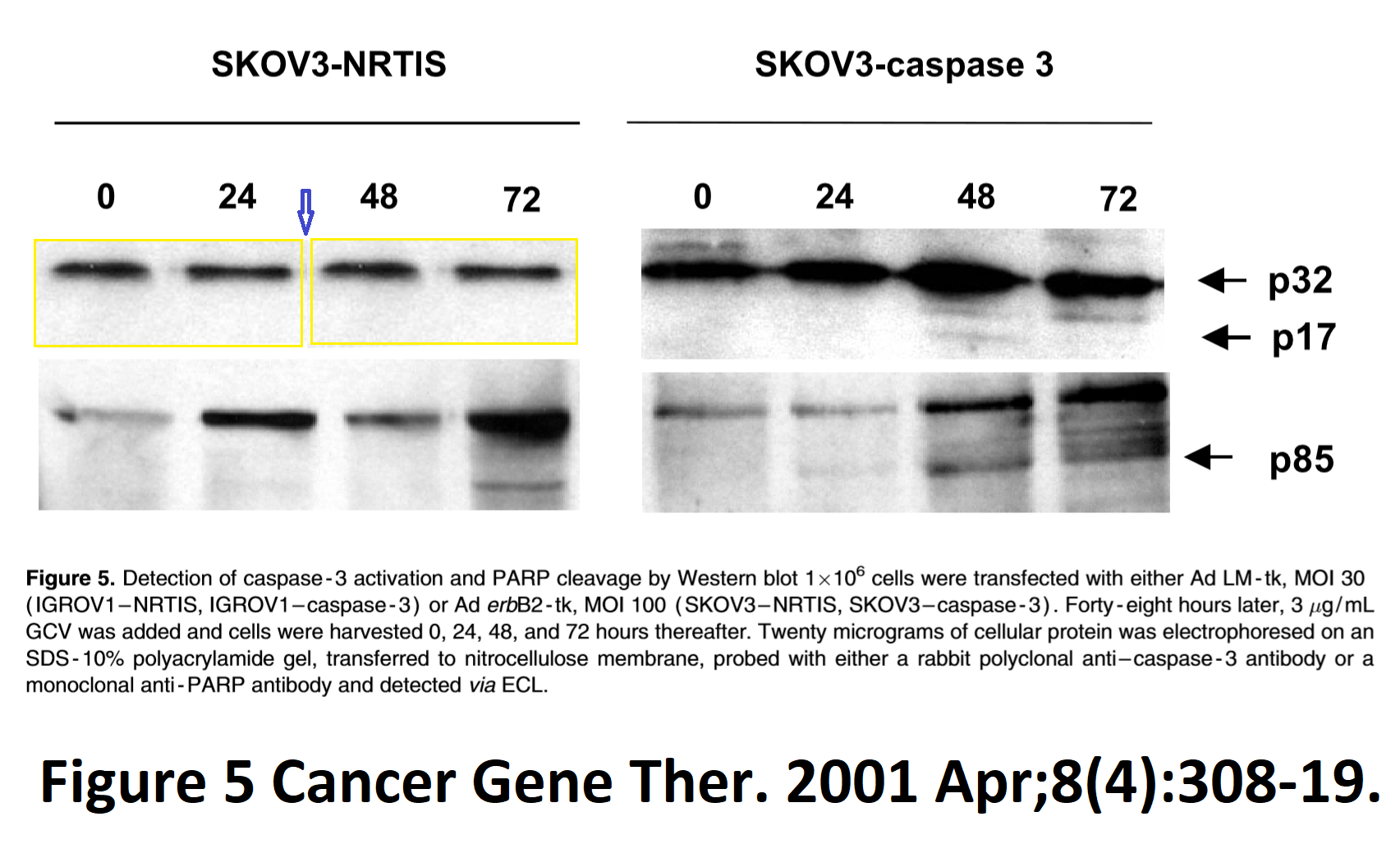 Even more can be found on PubPeer in the works in of McNeish et al 2001 last author, Nick Lemoine, formerly professor of molecular pathology at Imperial and now Chair of the Bart’s Cancer Institute in London. That was also mostly posted by pseudonymous sleuth Clare Francis, who also informed the universities involved. Not that anyone cares, just like with ICR, also on Bart’s case it will the institute director investigating himself.  Lemoine is also Chair of trustees at MRC, in case anyone is concerned about MRC’s attitude to research integrity, they can complain to Professor Lemoine.

It is basically a culture of mutual back-scratching and one hand washes the other in cancer research. Lam might be not the biggest shark in the pond, but one quickly sees that those above him and at the helm of British cancer research are, let’s put it this way, conflicted themselves. Yet this kind of bad science quickly leads to clinical trials, with millions of pounds, dollars or euros wasted, where thousands of cancer patients are given false hope and subjected to potentially dangerous therapies based on a flimsy, unreliable or plain fake lab data. Those same people unable to present a convincing western blot without the help of Photoshop, keep asking the public to donate to cancer research.

Maybe this is why there is so little progress relative to the enormous financial effort worldwide. What if the really radical approach to war on cancer would be not throwing good money after bad in Moonshot programmes, not inventing new crazy theories of cancer, not stripping patients of basic protection so new methods can be quickly tested on them on a hunch, but introducing some basic research integrity for a change? It would cost very little, in fact it would liberate enormous sums which more honest scientists could use for better science.

Update 25.11.2018. Same day and just a couple of hours after this article appeared, Lam’s Head of Department Iain McNeish went to PubPeer to share the results of an investigation on his own problematic paper with Nick Lemoine, in this comment. In brief, the gel band duplications were confirmed and original data was not available. This was exactly the reason why Imperial and Bart’s Cancer Institute decided not to retract or even to correct the paper. And anyway, some of the duplicated bands were, as McNeish said, “only control lanes”. McNeish announced to be now in charge of monitoring and punishing exactly same transgressions as his own paper shows.

In Britain, goats are appointed gardeners, by other goats.

“None of these issues in my opinion change the conclusions made in the papers. I see no merit in retracting these important publications or publishing an erratum at this late stage, although agree that there have been errors made in producing the figures.

It should also be noted that the original data was no longer available for review. […] The investigation stated that the conclusions made from the published studies were valid and important, even accounting for these reporting errors.

I recommend that measures are put in place to avoid such issues surrounding research data quality and reporting in future. […]

As first author, I accept the findings of this investigation. The Division of Cancer at Imperial College has now established a data integrity committee that will investigates suspected data irregularities and also to review the current practices relating to research data storage and reporting.”