Roland Lill is the quiet star of German molecular biology. The 63-year old professor works at the University of Marburg, on mitochondria, using yeast as a model organism. Lill is also since 2014 member of the Senate at the German Research Foundation (DFG), re-elected just recently, where he represents the interests of German molecular biologists and decides on federal funding distribution and research policies. Since 2016, the Marburg professor is also Senator for Biochemistry and Biophysics at the Leopoldina, which is the German Academy of Sciences. Furthermore, Lill is EMBO member since 2013 and he also used to be Fellow of the Max Planck Society.

Lill’s research focus is on iron-sulfur biogenesis, and his achievements for German science are indeed strong as iron, as evident by his awards and medals (including the Leibniz Prize of €1.55 Mn in 2003), his impressive funding acquisition success and publication record. Recently however, a sulfuric smell of rotten eggs emitted from the whistleblowing platform PubPeer, tainting his legacy. Currently 9 Lill papers are affected, the evidence looks worrisome, and might indicate possible data manipulations. Mostly it is about apparently duplicated gel bands. Luckily however, most papers are 13 and more years old, nobody would expect Professor Lill to have stored the original data for so long, even if it was ever available. The despicable attack on Professor’s Lill research record will be surely thwarted by the journals’ reluctance of dealing with problems in old papers, and of course by the tremendous respect and influence this Senator enjoys in German academia. In fact, both DFG and the two research integrity Ombudspersons of the University of Marburg refused to comment on the PubPeer evidence. Leopoldina announced to me to have the “accusations” addressed by their Ombudsman; DFG mentioned to have had the PubPeer information “forwarded inside the house”.

There can be only one explanation. Someone, or a group of someones, have been trying to damage Professor Lill for decades by sneaking suspicious-looking data into his publications. One might be tempted to blame Lill’s past PhD student, Heike Lange, who is now a tenured researcher at The Olivier Voinnet Institute for Research Integrity in Plant Sciences, also known as the CNRS Institut de Biologie Moléculaire des Plantes (IBMP) in Strasbourg, France. After leaving the Lill lab in Marburg, Lange apparently kept on accidentally duplicating gel bands in her publications, as evident in this IBMP paper Lange et al 2011. These are Lange’s disputed papers with Lill:

A mitochondrial ferredoxin is essential for biogenesis of cellular iron-sulfur proteins.
Proceedings of the National Academy of Sciences of the United States of America (2000) doi: 10.1073/pnas.97.3.1050

Isa1p is a component of the mitochondrial machinery for maturation of cellular iron-sulfur proteins and requires conserved cysteine residues for function.
The Journal of biological chemistry (2000) doi: 10.1074/jbc.M909502199

An essential function of the mitochondrial sulfhydryl oxidase Erv1p/ALR in the maturation of cytosolic Fe/S proteins.
EMBO reports (2001) doi: 10.1093/embo-reports/kve161

Dear Madam/Sir,
We have inspected the claim that several bands in Fig. 4 of our EMBO Rep paper from 2001 “are duplicates (red, blue) or flipped duplicates (green)”. Especially in larger magnification, it easily becomes clear that the criticized couples are NOT identical. We further note that the result of this figure (i.e. Erv1 is a protein of the mitochondrial intermembrane space) has been verified by other labs many times since our publication.
Sincerely,
Heike Lange and Roland Lill

The heme synthesis defect of mutants impaired in mitochondrial iron-sulfur protein biogenesis is caused by reversible inhibition of ferrochelatase.
The Journal of biological chemistry (2004) doi: 10.1074/jbc.M403721200

Problem is, Lange is not co-author on a number of other papers from Lill lab. One wonders, which sinister powers might be then behind that attempt to rust the iron legacy of professor Lill:

The hydrogenase-like Nar1p is essential for maturation of cytosolic and nuclear iron–sulphur proteins
The EMBO Journal (2004) doi: 10.1038/sj.emboj.7600216

So what happened in the Lill lab in early noughties? Luckily, those secretive misdeeds of parties unknown did not damage the authors’ careers. Janneke Balk is now group leader at John Innes Centre in Norwich, UK; Heike Lange is respected tenured researcher at IBMP in Strasbourg, where she occasionally marches for science (5th from right on tweeted photo below). Also Professor Lill is listed as official supporter of March for Science Germany.

There is only one recent Lill paper flagged on PubPeer so far, featuring as corresponding author Lill’s long-term junior associate and regular co-author on above papers, Ulrich Mühlenhoff:

Finally, a reader of my site sent me another possible image duplication, from a very ancient Lill publication (Csere et al 1998, below). It indicates that the conspiracy against Professor Lill probably started long ago. But what if the busy Senator was actually tricked to agree to function as lead author on manipulated publications he had scientifically no influence over? Only recently DFG saved an ophthalmology professor and Berlin university clinic director, Antonia Joussen, by uncovering just such a constellation. Joussen was cleared of all suspicion and advised by the DFG to be careful in the future on where she agrees to function as corresponding author, since those papers might contain manipulated data. Did the same happen inadvertently to Lill? Will DFG provide their senator with the similar advice?

Update 12.08.2017. Balk now commented on PubPeer, and admitted intentional gel band duplications shown above, which were performed with knowledge and approval from Lill:

“This response is from Janneke Balk, with input from Roland Lill.

After being alerted to our paper on PubPeer, we needed a bit of time to find my notebooks from 2004, which turned out to be still in Marburg. Roland then scanned the relevant pages and emailed those to me in Norwich. Everything was clearly described.

The immuno-labelling signals for Cfd1-HA in Figure 6C (Balk et al. 2005 Mol Cell Biol) are indeed duplicated. However, this stems from the design of the experiment and how we chose to present the data in a figure”.

Then follows a lengthy explanation about the experimental details which supposedly justified duplicating bands in a Photoshop-like software to generate what was then published as seemingly independent western blots. Balk concludes:

“Looking back at the results after so many years and now with knowledge of the helpful guidance on digital image manipulation from Rossner & Yamada 2005 (J Cell Biol. 166, 1 – 11), the ‘wt’ signals in C should have been separated from the ‘up’ lanes. Or I should have loaded the samples twice on the gel, in anticipation of the figure layout.

Scans of the films from Janneke Balk’s laboratory notebook are attached. Annotations in colour have been added for the benefit of PubPeer readers”. 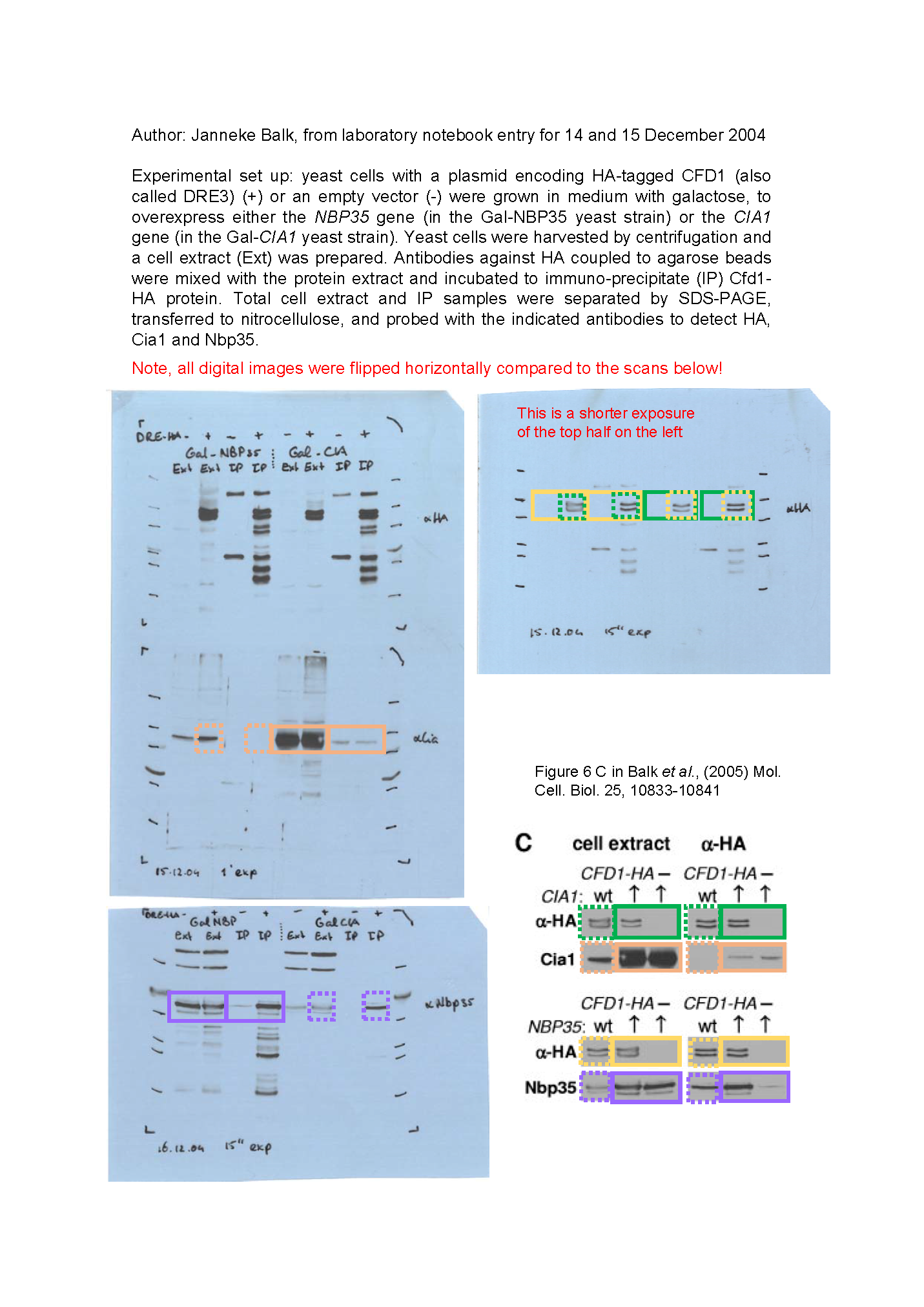