This is a story of western blot, which might be holding the current record of re-use. While other papers are plagued by image duplications, this little western blot seems to have been used in a different context 12 times, in 10 papers, in 9 different journals. At least this is the current count. As the evidence suggests, the blot began its wandering adventures in 2006 and stood in for a different protein each time. It may have started as a western blot probed for glucose transporter GLUT4 or phosphotyrosine, but actually, it is now really hard to say what it may originally have been.

The wandering western blot’s owners are the Brazilian physiologists Mario José Abdalla Saad and his colleagues José Barreto Campello Carvalheira, Cláudio T. De Souza and Lício Augusto Velloso. I received the information from this, well, duodecuplication, from a concerned source whose identity I was asked to keep confidential. Therefore, I have assembled a PowerPoint file on this wandering western blot, with the corresponding editorial replies (or the lack of them) attached as presentation notes. The file is publicly accessible here.

Mario Saad is medicine professor at the Brazilian State University of Campinas in São Paolo (Universidade Estadual de Campinas, UNICAMP) and member of the Brazilian Academy of Sciences. He is also somewhat of a celebrity on RetractionWatch. So far Saad had to retract one paper for plagiarism, issued a 12-figure correction in PLOS One and unsuccessfully sued the American Diabetes Association (ADA), publisher of the journal Diabetes, protesting against their Expression of Concern on four of his papers there. None of these papers has been retracted yet, while the Expression of Concern is already one year old. The wandering western blot also made into one of these Diabetes papers.

Saad himself, asked to address the wandering western blot issue, immediately replied to my email:

“I only can comment the manuscripts that I am the PI or the correspondent author.

These manuscripts were investigated by an independent commission, with scientists outside our University, and we showed that most of these allegations were false. We showed all the original gels and proved that what they accuse of duplicated images are, in most of the cases similar images coming from different gels. In a previous manuscript that we identified the same image, an unintentional mistake, we wrote to the journal and asked for correction.  We invite people to come to our lab to check the original images”.

This is an example of the wandering western blot in a paper where Saad is corresponding author:

Remarkably, Saad is often not even a co-author on some of the papers featuring the wandering western blot. However, none of the other corresponding authors and Saad’s colleagues, namely Carvalheira, oncology professor at UNICAMP clinic, De Souza, physiology professor at Universidade do Extremo Sul Catarinense and Lício Velloso, Saad’s former postdoc, and now group leader at at UNICAMP, chose to reply my emails, despite a reminder. Therefore, it is unclear how the western blot made it into Saad-free papers like this one:

Saad and his UNICAMP colleagues were banned in 2014 by ADA from submitting papers to their journals. RetractionWatch indirectly quotes Christian Kohler, managing director and member of ADA’s Panel on Ethical Scientific Programs, as having informed in December 2014:

“Most detrimental, the ADA stated that it will not consider, for publication in any ADA journal any submissions authored by any of the faculty of the University until the issues described in the expression of concern have been appropriately reviewed and addressed by the University [UNICAMP,- LS]”.

To me, Kohler now wrote:

“The American Diabetes Association, the publisher of Diabetes, is aware of this issue, which is currently under review by the Association’s Panel of Ethical Scientific Programs (ESP). The ESP works on behalf of ADA journal editors to review potential instances of scientific or academic misconduct in manuscripts submitted to or published in ADA journals”.

Saad was exonerated by the first UNICAMP investigation, which results ADA did not recognize and insisted on a second one. Its outcome or even existence is unsure. Nevertheless, it seems that the ban is now history. Good evidence for it is that Velloso was welcome to publish a paper in Diabetes in October 2015.

There is indeed not enough evidence that the all editorial offices are taking the issue of data integrity in their Saad & Co papers seriously. Though I received a reply from 7 publishers, FEBS Letters and Life Sciences did not respond to my email at all. Here is what the University of Heidelberg-based FEBS Letters may or may not be investigating: 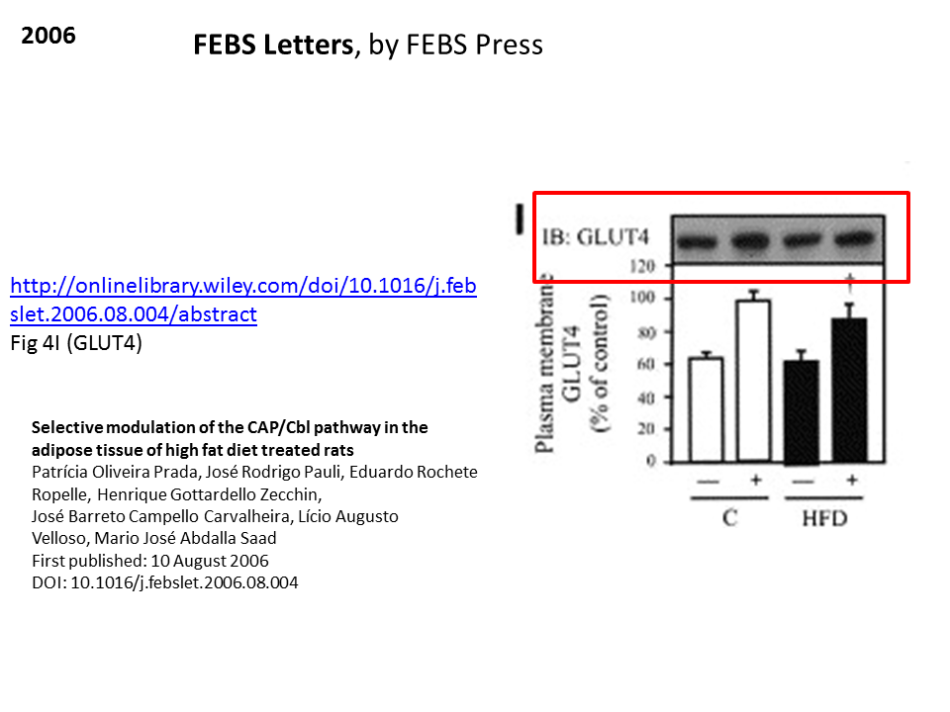 Also, while I was informed by the Deputy Director of Publications at Federation of American Societies for Experimental Biology (FASEB), Cody Mooneyhan, that they “are moving this forward according to our editorial policies on misconduct”, my source completely failed to get through. To this anonymous informant, Mooneyhan wrote:

“It appears that you are accusing the authors of this paper of academic misconduct. We take these accusations very seriously, but we cannot accept them anonymously. (Please see the journal’s policies on misconduct.) If you wish to remain anonymous, we encourage you to contact the authors’ institution(s) directly with your concerns.

That is indeed an interesting attitude to processing evidence of potential misconduct, especially from the respectable FASEB. As I have not submitted any such formal letter either, I now wonder if my inquiry was accepted at all, and whether FASEB Journal will really follow this up: 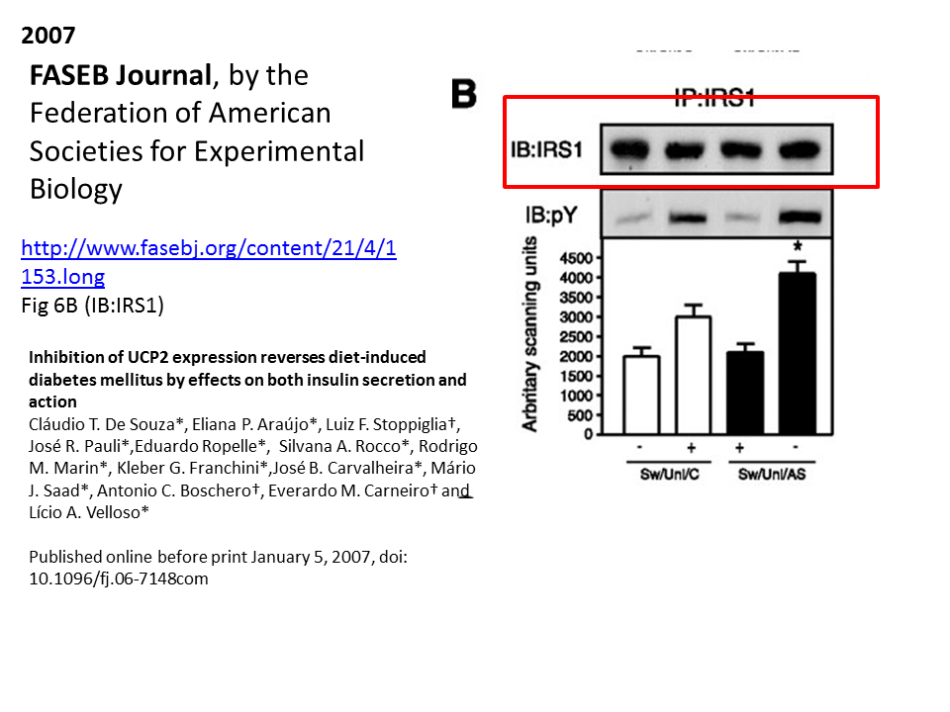 Some publishers however, like PLOS One, Gastroenterology, The Physiological Society and Endocrine Society, were somewhat more convincing, by claiming that investigations are already initiated (or about to). With PLOS One and Gastroenterology, the wandering western blot seems to feature even twice inside the same paper, standing in for JAK2 and STAT3 as well as IKKβ and IRβ, respectively.

Here again are the images, as well as the PPT file.

33 comments on “The Duodecuplication of a Wandering Western Blot”