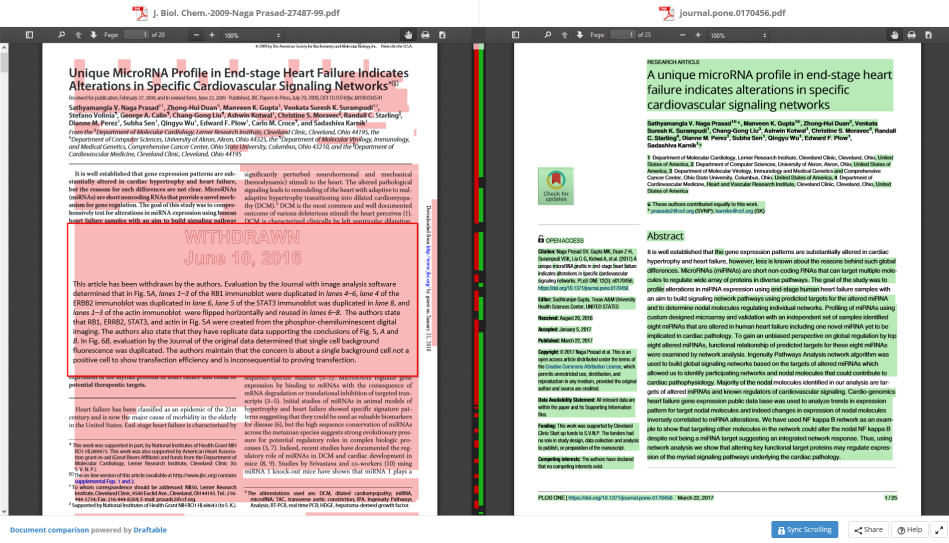 On July 29th 2016, Journal of Biological Chemistry (JBC) retracted a cardiology paper from 2009 for data manipulations. Only some days later, on August 20th 2016, the corresponding authors Sathyamangla Naga Prasad and Sadashiva Karnik (both from the same Department of Molecular Cardiology at Cleveland Clinic in Ohio, US, submit that same paper, under same title, with only some changes, to PLOS One. All authors remained the same, only two mysteriously fell off the paper: George Calin and his former mentor Carlo Croce. The latter is a notorious cancer researcher from Ohio State University, PubPeer star accused of misconduct and author on 7 retracted papers (according to the new Retraction Watch database). Croce even made it into New York Times, which he now sues, together with his critic David Sanders. (some more details here).

It makes sense why Prasad and Karlin decided to play it safe and throw their toxic Ohio colleague Croce and his loyal former lab member Calin off their paper. They even replaced a fake western blot which caused the JBC retraction. This refurbished PLOS One paper was accepted on January 5th 2017 and published on March 22nd 2017. Now also the handling editor at PLOS has now a lot of explaining to do: Sudhiranjan Gupta, from Texas A&M University. A man who understood Prasad’s and Karnik’s dilemma, because also Gupta has his own record of gel band duplications on PubPeer, all of these incidentally with his former boss at Cleveland Clinic, Subha Sen, who in turn is co-author on both the retracted Prasad et al JBC 2009 and the new Prasad et al PLOS One 2017.

Using the free online plagiarism tool at Draftable.com, I was able to establish an extensive textual overlap, the files are available here and here. The well-known sleuth Claire Francis established figure re-use, which I document below.

The questions this incident raises are: 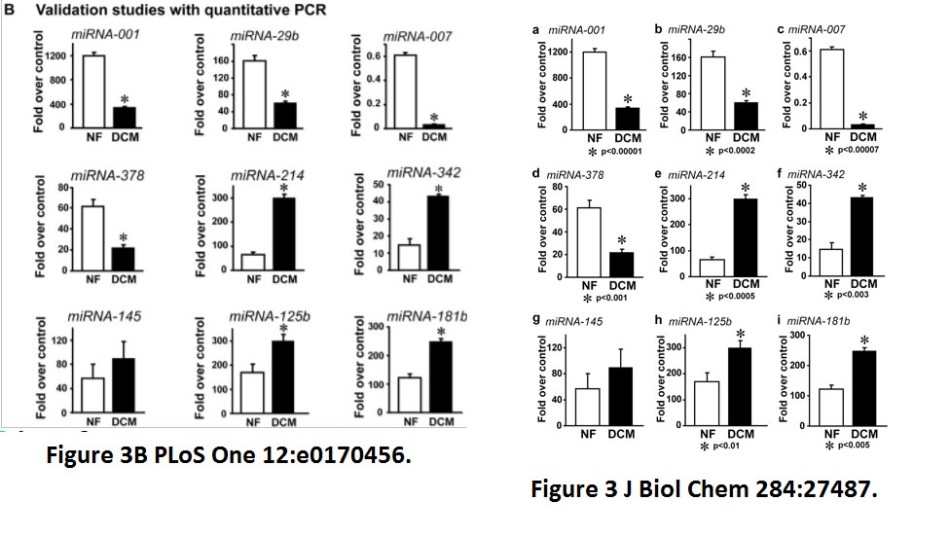 This was the retracted Prasad et al JBC 2009 paper:

Its retraction notice from July 2016 went:

“This article has been withdrawn by the authors. Evaluation by the journal with image analysis software determined that in Fig. 5A, lanes 1–3 of the RB1 immunoblot were duplicated in lanes 4–6, lane 4 of the ERBB2 immunoblot was duplicated in lane 6, lane 5 of the STAT3 immunoblot was duplicated in lane 8, and lanes 1–3 of the actin immunoblot were flipped horizontally and reused in lanes 6–8. The authors state that RB1, ERRB2, STAT3, and actin in Fig. 5A were created from phosphor-chemiluminescent digital imaging. The authors also state that they have replicate data supporting the conclusions of Fig. 5, A and B. In Fig. 6B, evaluation by the journal of the original data determined that single cell background fluorescence was duplicated. The authors maintain that the concern is about a single background cell not a positive cell to show transfection efficiency and is inconsequential to proving transfection”.

Indeed the authors replaced the offending Figure 5 with new western blots. But they left the Figure 6B intact, which is now Figure 4B in their new PLOS One paper.

PLOS One Editor-in-Chief Jörg Heber commented to me on the role of his journal in this affair:

“My team will need to take a closer look at the situation. From a very quick glance at the file, it doesn’t look like this was intentional.”

Correction: an earlier version of this article erroneously interpreted all items listed by RW database as retractions. There are only 7 retractions, others were in fact corrections and expressions of concern.

Update 4.02.2018: Plos One was already aware of the issue on May 1st 2017, as Subramaniam Sanker commented below. Here is the full email exchange between him and the journal.