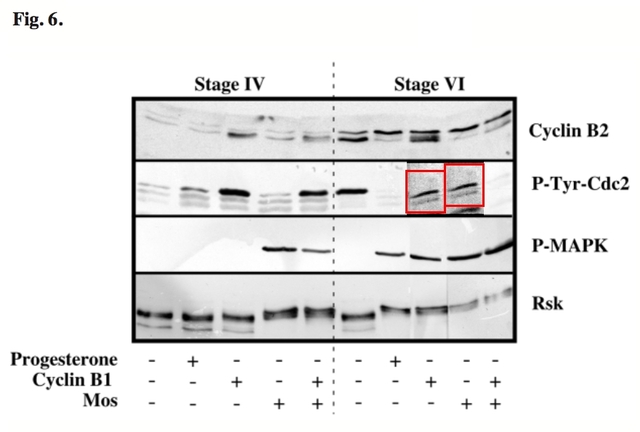 More suspected data manipulations in the papers by the French elite biologists. It was funny enough when the director and several lead figures at the Strasbourg CNRS institute for plant sciences IBMP, former home of the master data manipulator Olivier Voinnet, and even the institute’s evaluators, were found to sport quite a lot of shifty-looking data in their papers. This time, the irony is just too much. Catherine Jessus, developmental biologist specialising on cell cycle research on oocytes and director of CNRS l’Institut des sciences biologiques (INSB) was in charge of two misconduct cases, and now the data integrity of her own papers is called in question. One investigation led by Jessus was about, whom else, Voinnet and his IBMP sidekick Patrice Dunoyer. In summer 2015, Voinnet was barred from CNRS for 2 years (which sounds worse than it is, because his professorship at ETH Zürich in Switzerland remained untouched, read here), and Dunoyer was suspended for one entire month. Jessus’ secret investigation ended with no documents whatsoever but a terse press release made available to outsiders. Both Voinnet and Dunoyer are by now back to publishing papers in prestigious journals.

Jessus was also in charge of dealing with the misconduct evidence against Voinnet’s former postdoc Charles-Henri Lecellier, whom the mighty plant scientist (according to my sources) banned from his Strasbourg lab because he did not trust his research results. It seems Lecellier started to fudge data already during his PhD at CNRS Hôpital Saint-Louis in Paris (PubPeer record here). Imagine how bad it must get that Voinnet expels you for data manipulation! The tenured CNRS researcher was hence moved out of Voinnet’s sight, to work as group leader at the Institut de Génétique Moléculaire de Montpellier, where he continued his own line of data rigging, helped by his trusted friend from IBMP, Guillaume Vetter (see my earlier reporting for a German magazine here and here). Apparently, with full protection from CNRS: in 2013 Jessus actively opposed on behalf of CNRS the impending retraction of a Lecellier co-authored paper, despite earlier misconduct findings against his partner Vetter at the University of Luxembourg (evidence here, especially this letter, example of data manipulations here).

The university’s and last author’s requests of retraction to the NPG journal Oncogene were initially overruled by Lecellier’s and Jessus’ insistence to issue a correction instead, but the paper Vetter et al 2010 was eventually pulled in December 2015 following my reporting. Nothing at all happened to other problematic papers by Lecellier, one of most troublesome of which was Saumet et al 2008, where real-time PCR data was selectively “modified” to accommodate peer reviewer criticisms (see highlighted changes here and Lecellier’s originally submitted manuscript here). The journal Blood, published by American Society of Hematology, ignored all that evidence, and so did CNRS and Jessus.

Now, I was presented with some evidence of inappropriate data handling in Jessus’ own papers. It doesn’t look like the “mistakes” were accidental, whoever did them. Does this explain Jessus’ understanding stance towards Lecellier and Voinnet?

I wrote to her, but just as my Voinnet inquiries over 2 years ago, I received no reply. There is only one way to resolve this: Olivier Voinnet, whose ban from CNRS has now expired, should return and investigate Catherine Jessus, to complete the circle.

So here are four Jessus papers, and the evidence I was forwarded.

Update 6.09.2017. This new evidence regarding Karaiskou et al 1999 was forwarded to me by another reader of my site. The first author Anthi Karaiskou is now  associate professor at Pierre and Marie Curie University in Paris.

Update 6.09.2017. This new evidence regarding Karaiskou et al 2004 was forwarded to me by another reader of my site:

Roles of Greatwall kinase in the regulation of cdc25 phosphatase.

Update 8.09.2017. Concerns about another Jessus co-authored paper have been raised:

Update 18.09.2017. Will this ever stop? With currently 9 Jessus-co-authored papers flagged on my site and on PubPeer, here comes Nr 10:

The phosphorylation of ARPP19 by Greatwall renders the autoamplification of MPF independent of PKA in Xenopus oocytes
J Cell Sci 2013 : doi: 10.1242/jcs.126599

Update 22.09.2017. For those who thought the data integrity issues in Jessus lab were ancient history, this paper Dupre et al 2017 was just published in Cell Cycle. Some say gel splicing was used to perfectly acceptable 10 years ago, but never irregular splicing like below. And this paper is just 2 months old.

Catherine Jessus explains to CNRS units directors that she has been cleared from misconduct by Paris 6 university pic.twitter.com/cxDb2kBIyE

I also learned that the investigation by l’Université Pierre et Marie Curie (UPMC)  found minor errors in 3 Jessus publications, and nothing untoward whatsoever in other papers listed here and on PubPeer. I then contacted the UPMC Delegate for Ethics and integrity for the Directoire de la Recherche, Olivier Pironneau, with the UPMC President in cc, for further information.  I received no reply at all, which maybe due to this statement on Pironneau’s institutional page:

“Need to email me? (carpet baggers will be ruthlessly junked)”

Update 21.02.2018: CNRS now released the UPMC report, after I published this article. It is scary. Data manipulation was declared to be good scientific practice, while CNRS now publicly demands my head.