Protein expression analysis by western blots appears to be the weak spot of life science, because these blots are so often reported to be manipulated. However, this is only because anybody, even without any background in biology can spot re-used western blot bands, just using a good eye or some computer skills. Unlike with other analytical tools, like real-time PCR or microscopy imaging, you don’t need specialist knowledge or access to raw data to spot digital manipulations of western blots. One of the most famous western blot breeders is the Brazilian diabetes researcher Mario Saad (see whistleblower reports on my site here and here). Below is the case of his two colleagues from Poland.

Some time ago, I was contacted by a Polish scientist with a dossier of suspected western blot duplications in the publication of the pharmacologist Bożena Gabryel from the Department of Pharmacology at the Medical University of Silesia in Katowice, Poland. Gabryel specializes in oxidative stress research, four of her publications on this topic were accused to feature duplicated western blots, in different context. Sometimes suspicions were raised that selected individual bands in different western blots look too similar, which might suggest manipulative band duplications.

Soon after, another whistleblower independently contacted me with another dossier about yet another set of Gabryel’s papers, all featuring as lead or even corresponding author Krzysztof Łabuzek, who is an adjunct professor at this same Medical University  of Silesia with interest in immune system and who also has a clinical practice for internal medicine in a small town near Katowice. Labuzek’s papers seem to feature a whole gallery of re-used western blots, as the dossier suggests. Additionally, that second whistleblower expressed concerns about  western blot splicing and suspected band re-used in papers featuring the first author Joanna Ślusarczyk, PhD student in the lab of Agnieszka Basta-Kaim at the Polish Academy of Sciences in Krakow. Basta-Kaim is also co-author on one Gabryel paper now suspected of data manipulations.

Peculiarly, Labuzek and his coauthors had to retract in December 2016 the paper Buldak et al 2016 from Spandidos journal Experimental and Therapeutic Medicine, not even a year after that paper was published. The retraction notice shows a peculiar attitude of the authors to research integrity:

“ Following an enquiry that we received concerning the data presented in the western blots in Figs. 2-5 of the above article, we attempted to perform a thorough analysis of the data, but the original blots in their entirety were found to be missing. The error in blot selection is likely to have occurred during the final stages of figure preparation, and furthermore, the stored biological material was insufficient to enable the experiments to be repeated. Although we consider that the integrity of the data was not affected (which, unfortunately, we are unable to confirm), all the authors are in agreement that it would be prudent to retract the manuscript”.

So, to Labuzek even if the actual experimental data or samples are missing (or maybe never existed), there is no reason to doubt their hypothetical integrity anyway.  One is tempted to see Labuzek alone as the creative party responsible for re-used western blots and bands, but his name is absent on two of the four Gabryel papers reported by the first whistleblower (who chose an assumed name “Ewa Stutman”). These are the papers, and the responses I obtained from the Editors-in-Chief (EiC) of the respective journals is also provided.

Here, the journal’s EiC Patricia A. D’Amore, professor of ophthalmology and pathology at Harvard Medical School, USA announced to “forward it to our legal department who handles such issues”.

Unfortunately, the EiC of that journal, Matthew LaVoie, who is professor of neurology at Brigham and Women’s Hospital, USA, chose not to reply to my two emails. Thus, I am not sure if this Harvard Medical School professor found the Polish evidence on data integrity in his own journal compelling enough to waste his precious time on it.

The EiC of this journal, Sergio Schenkman, professor of microbiology at the Universidade Federal de Sao Paulo in Brazil, seemed rather convinced by the figure reuse across sevral manuscripts and announced to me to “ask the authors an explanation and take the right measures soon”.

A reaction from this journal’s EiC is presented below.

The whistleblower Ewa Stutman tells this:

“Some time ago reading original papers I noticed surprisingly similar bands in presented western blots. After looking in depth into data showed in other publications of the same corresponding author (Bozena Gabryel I found a series of publications where  the same bands were repeatedly presented as results of immunodetection of different proteins in totally different experiments. I couldn’t believe my eyes when I saw that”.

Here are some of these examples, the full dossier is available here:

“There is no problem to find more combinations of the same bands showed in different configurations in publications of Dr Gabryel. Only a few examples are presented“.

The second whistleblower offered no assumed name. Below is some of his evidence (full dossier here and here), following the list of flagged Labuzek papers, Gabryel is a co-author on four of them:

The EiC of this journal, Joan Cranmer, professor of pediatrics at the University of Arkansas for Medical Sciences, USA, forwarded the evidence to the Elsevier Journal Manager, Clement Abinesh, who announced to me to “check the details” and keep me updated.

Here the journal’s EiC Roland Seifert, head of Institute of Pharmacology at Hannover Medical School (MHH) in Germany promised in his email from December 11th 2016 to investigate the “suspected case of data duplication” according to their standard operating practice.

The EiC of this Polish journal Władysław Lasoń, pharmacology professor at the Polish Academy of Sciences in Krakow,  acknowledged receiving the dossiers and forwarded me this editorial decision on another Labuzek paper which was not even mentioned in the dossier:

These files were attached, the erratum notice which simply stated without elaborating: “in this published article, Figure 3 contained a mistake”, and the corrected figure 3.

We can probably expect at least five more corrections of the Labuzek papers flagged by the two whistleblowers from Pharmacological Reports, which will mention in passing that some figures contained “a mistake”.

I notified also the Polish university of Gabryel and Labuzek. According to my information, the internal investigations at the Medical University of Silesia were dragging on without much visible progress, part of delay was caused by Gabryel herself postponing the hearing and digging up new evidence which allegedly exonerated her. Eventually, the Vice-Rector for Scientific Affairs had this explanatory note forwarded to me (the previous one is here):

Meanwhile, thanks to the hint from my second whistleblower, the Polish Academy of science might be interested in checking these two publications by the above mentioned Gabryel collaborator Basta-Kaim and her PhD student Slusarczyk (full dossier here):

Update 24.08.2017: this paper has been retracted on 11.07.2017 by the publisher Wiley, detailing all data manipulations. Quote from retraction notice:

“The Editorial Office was alerted by a science journalist that the same Western Blot lane had been used to represent two different proteins”. 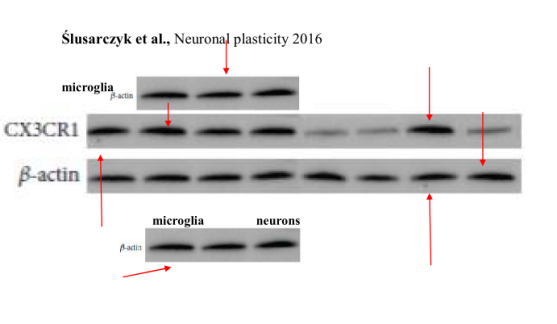 Update 18.01.2017. What does one say to this? A third Polish whistleblower contacted me with further evidence of apparent image re-use in these publications by Gabryel (full dossier here):

Now it’s not only western blots, but also microscopy images. How will the medical University of Silesia act upon this evidence? 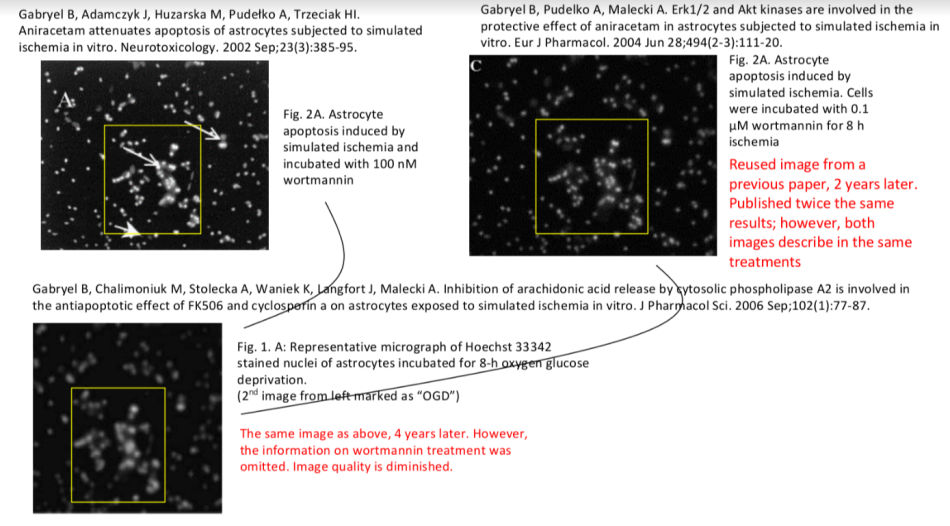 “Dear Sir,
In reply to your e-mail dated on 18.01.2017 which contains new information about suspected falsification of research results in the mentioned publications I kindly inform that contained data has been sent to the competent an authority in this case”.

I can’t recall sending an email on that day to the university, but the update above is dated 18.01.2017. It’s good to know my reporting is being taken seriously at Katowice.

21 comments on “The western blot doctors of Silesia”