A simple enough case of manipulated data in 17 papers from one cancer research lab in China, gets flagged on PubPeer. It ends with the Weibo bloggers who shared it silenced and censored, while the university hospital in Wuhan issued a secret statement accusing the US pharma giant Merck of a conspiracy to slander a Chinese Academy member with a “malicious attack”, in order to sabotage the development of a cervical cancer vaccine designed specifically to protect the Chinese. The research integrity investigation took less than two days, and data manipulations were not even denied. They were declared instead to be honest mistakes. PubPeer is now seen as

“another penetration of Western ideology, which seriously threatens the ideological security on China’s internet”

The posts on Chinese social media platform Weibo sharing the PubPeer evidence, the statement released for internal use only by the Tongji Hospital, they all were deleted in the matter of hours, but there are backups. The university hospital sees only a foreign conspiracy, will the journal follow this thinking? Some papers have been already corrected previously, like Gao et al PLOS One 2014, where duplicated images were replaced. Will there be any new corrections of literature? It is about recurrent bits of images, from immunohistochemistry and other microscopy, western blots, flow cytometry, or even photographs of cell culture wells like in Wang et al PLOS One 2012.

The story was discovered by my pseudonymous contributor TigerBB8, who now shares this guest post with you.

One year later, on December 18, 2018, a pseudonymous PubPeer user Lotus Azoricus posted their comments suspecting image irregularities for 17 papers, all from the same group in China, a group led by the Academician Published between 2005 and 2017, in English and in international journals, the papers from the Ma lab were all on cancer-related research, with Ma as the common corresponding author. The news soon caught attention of some micro-bloggers on Chinese internet, specifically, on Weibo, a social media platform similar to Twitter (which is blocked in China). Several Weibo bloggers reported the news while posting a couple of pictures flagged by PubPeer commenters, those posts received a couple of thousands reads. 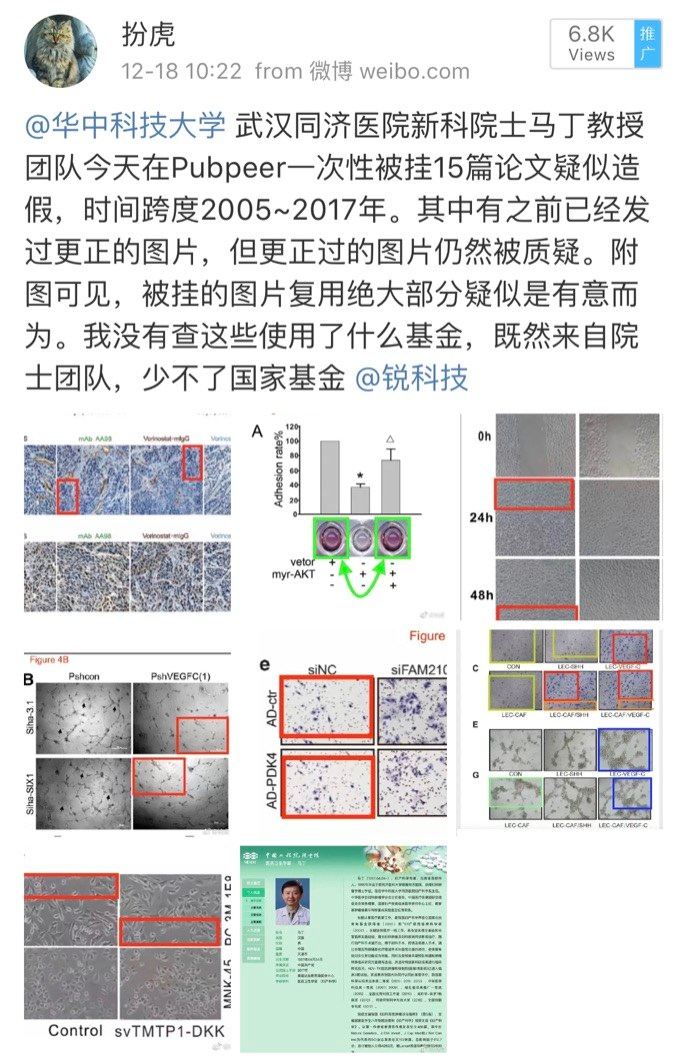 The next day, on 19 December 2018, the first authors of two of papers Ru Wei and Hongyang Wang went to PubPeer to post their identical one-sentence responses (here and here). Incidentally, Dr Ma was penultimate, but not the last author of both of these papers. The statements had at least 5 grammar errors:

“This issue have brought out our attention, we will seriously go through our data and response soon and take further actions“

One Weibo blogger re-posted the screenshot of these responses and made fun of their poor English, questioning how authors with such poor understanding of English could have drafted their original papers in English. The team of Dr. Ma remained silent on Chinese media.

On 20 December 2018, only two days after the incident about Dr. Ma was reported on Weibo, a seemingly official yet internal statement from his employer, Tongji Hospital, was leaked and posted on Weibo by a blogger who first reported the PubPeer thread Apparently, the statement was meant for internal communication only, and was shared by insiders via Weibo private message function. The versions posted publicly were soon all deleted, under pressure from the hospital. This is the original screenshot, superimposed over another case of manipulated data: 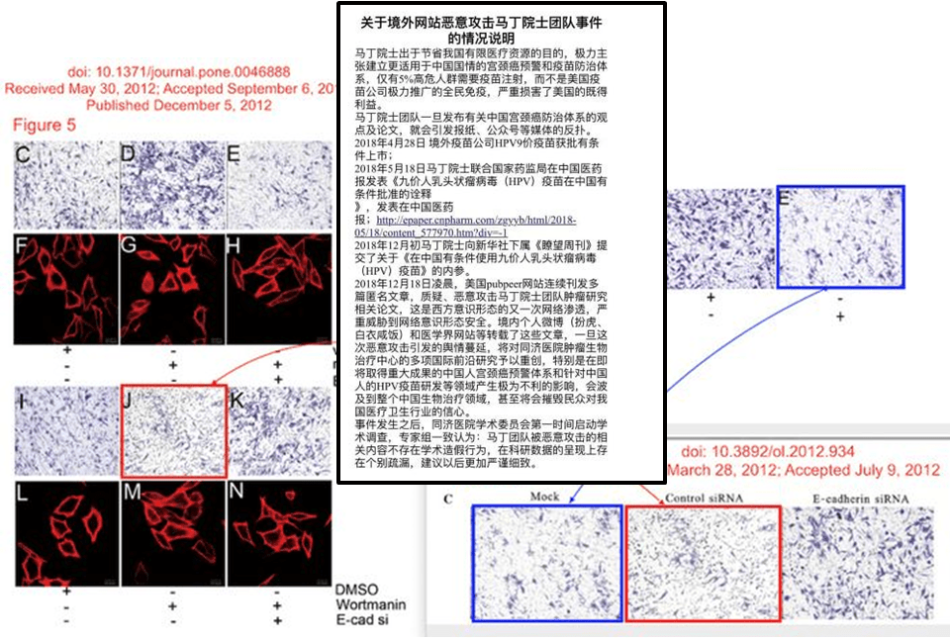 This is a translated version, annotated by Tiger BB8:

In order to save China’s limited healthcare resources, Academician Ding Ma strongly advocates the establishment of a cervical cancer early warning and vaccination system that is more appropriate for the situation in China. [According to Ding Ma, -TBB8], only the 5% of high-risk Chinese individuals need cervical cancer vaccination, rather than following the immunization program that recommended to the entire population that the US vaccine manufacturers strongly promote, bringing serious damage to the vested interests of the United States.

Once Academician Ding Ma’s team releases their opinions and papers on the Chinese cervical cancer prevention and treatment system, it will trigger counter-attacks from newspapers, public accounts of social media, etc. On April 28, 2018, an overseas vaccine manufacturer received conditional approval to market their HPV9 vaccine in China; on May 18, 2018, Academician Ding Ma, published an article, co-authored with the China FDA (CFDA) and titled “Interpretation of the Conditional Approval of Human Papillomavirus (HPV) 9-valent Vaccine in China” on China Pharmaceutical News (an official newspaper by CFDA).

In early December 2018, Academician Ding Ma submitted an article to NeiCan of the Xinhua News Agency’s Outlook Weekly [Refer here for description of this relatively secret internal reference reports edited by Xinhua News Service for limited distribution -TBB8] titled “The conditional use of the nine-valent human papillomavirus (HPV) vaccine in China”. In the early morning of December 18, 2018, the US Pubpeer website published a number of anonymous articles, questioning and maliciously attacking research papers from Academician Ma’s team. This is yet another network penetration of Western ideology, which seriously threatens the ideological security on China’s internet. These Pubpeer articles were reposted by the domestic personal micro bloggers (Banhu and Baiyixianfan) and YiXueJie – Medical Community website. If the public sentiment caused by this malicious attack spreads, many cutting-edge research projects which are of the world leading role at Tongji Hospital Cancer Biotherapy Center will be seriously damaged, especially when right now is the critical moment at the dawn of establishing the Chinese cervical cancer early warning system and the research and development of HPV vaccine specifically for Chinese people. The damaging effect will affect the entire field of biotherapy in China, and, even more serious, destroy the public’s confidence on China’s healthcare service.

Immediately after the incident, the Academic Committee of Tongji Hospital launched an investigation. The group of experts concluded unanimously that there was no academic fraud involved in the content of the papers from Ma’s team that had been maliciously attacked. There did exist some oversight in the presentation of scientific research data, and the recommendation from the Committee was that more rigorous and meticulous way should be implemented in the future work“.

Tongji Hospital misrepresents the US CDC recommendations. HPV (human papilloma virus) vaccination are namely advised not to the entire population, but to children who are 11 or 12 years old, teenagers, women up to age 26, men up to age 21, and other specified groups. Also, Tongji hospital alleges that US pharmaceutical companies which manufacture HPV vaccines, especially the one which received Chinese FDA’s clearance to enter Chinese market, was behind the malicious attack to Dr. Ma on Pubpeer. Although Tongji Hospital did not specify which company it referred to, some of the Weibo bloggers pointed out that this must be the U.S. based drug maker Merck & Co. Inc., based on a press release in May 2018.

At the end of the statement, Tongji Hospital states that they had already completed an investigation regarding the Pubpeer allegation of suspected image frauds involved in Dr. Ma’s papers, the matter of only 2 days which passed between the PubPeer publication of comments and the released statement. Their conclusion was that none of the allegations was solid. All the flagged figures were nothing but honest mistakes.

Within hours of the appearance of the statement, all those bloggers who reported the PubPeer evidence received serious warnings from the Weibo admin, with one of them was suspended for 30 days, and all relevant posts were deleted.