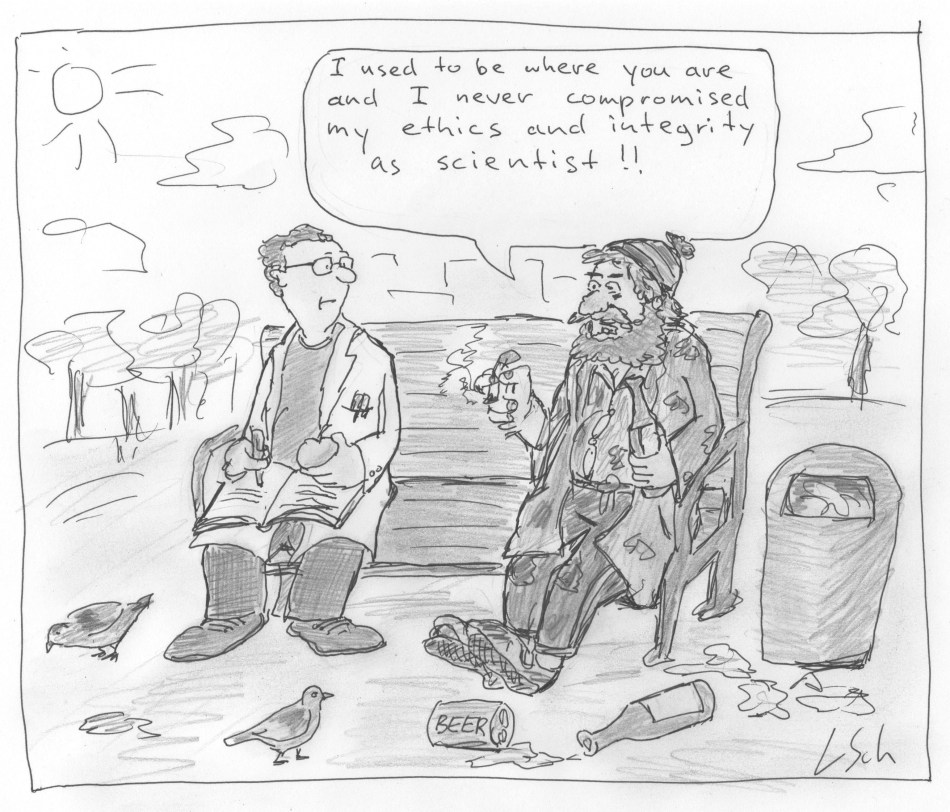 There are zombie papers, those are the long-discredited or even misconduct-riddled publications, which somehow avoid retractions and continue contaminating scientific literature. The “Arsenic Life” paper in Science is such a parade example, but also cancer and stem research hide an impressive collection of zombie papers.

Zombie scientists are those once renowned researchers, who were caught on misconduct and had their papers retracted, yet were still able to retain their faculty positions, where they teach students and sometimes even receive funding and continue publishing. This might appear somewhat cynical, given how many good and honest scientists struggle to keep a foot in the door or are forced to give up academia and search for “alternative careers”.

A recent glitch in the website of the clinical research centre Forschungszentrum Borstel in northern Germany brought back an old and seemingly forgotten case of research misconduct. A list of 12 retractions of the Italian immunologist Silvia Bulfone-Paus appeared last week as a “Pressenotiz”, and soon disappeared. It is however still available in Google cache. The Scientific Officer Bettina Brand explained that it was the same press release as the one published on March 21st 2011.

Bulfone-Paus is well known to regular RetractionWatch readers, her last count was at 13 retractions. Originally, data manipulations in numerous of her publications were made public by an anonymous whistle-blower, using cover names like “Fernando Pessoa”, “Marco Berns” and seemingly, the legendary “Clare Francis” as well. Basically, he (for it is likely a “he”, and I used to communicate with him some time ago by email) did what is nowadays rather common on PubPeer. In 2010 however, it was deemed a “smear campaign”. An indignant Nature editorial spoke of a “trial-by-Internet” and lamented that “little can be done to stop” the anonymous accuser. Maybe just as well, for who knows what would have happened (or rather, not happened), without that public dissemination of damning evidence.

Until then, Bulfone-Paus used to be director of the Department of Immunology at the Forschungszentrum Borstel, from which she retreated already in December 2010. She also had a tenured professorship at the University of Lübeck, which she resigned from soon after the investigation into her misconduct by the German state funder DFG was concluded. Bulfone-Paus was seemingly exonerated by the DFG: her two Russian postdocs took the exclusive responsibility for data manipulations, while their professor was only found guilty of “gross negligence of her supervisory duty” and banned from DFG funding for 3 years. Yet, Bulfone-Paus’ research career in Germany was obviously untenable.

Strikingly though, Bulfone-Paus retained her immunobiology professorship at the University of Manchester, where she currently leads a research group of 5 scientists at the Manchester Collaborative Centre for Inflammation Research (MCCIR). As Times Higher Education reported in 2011, “the University of Manchester announced that it did not believe the concerns about the papers merited a formal investigation”. Since the unpleasant career stutter in 2011/2012, what with the 13 retraction and losing highly paid professorships in Germany, Bulfone-Paus was able to publish five papers. No, not at all with some obscure or predatory publishers. In fact, she was very welcome as author with the subscription publishers Wiley, at the European Journal of Immunology and the journal Allergy, and most recently with Taylor & Francis, at their journal OncoImmunology.  Bulfone-Paus even published with PLOS One, a paper largely consisting of Excel diagrams. This is of course a very wise choice, once one had so much trouble with manipulated images.

@schneiderleonid @PLOSONE You may email the authors to request the data, under our former data policy: https://t.co/17VHdGc8A3

It is puzzling why the journals do not blacklist such scientists. Science operates largely on trust, and Bulfone-Paus has destroyed it. What evidence is there for the Manchester faculty and the journal editors as well as peer reviewers that Bulfone-Paus research has suddenly become trustworthy? It seems in this context rather ironic that same publisher Taylor & Francis has banned the scientist Jaime Teixeira da Silva for “continuing challenges” and using “inflammatory language”. One can safely assume that Bulfone-Paus would never employ untoward wordings with her manuscript submissions to this or any other publisher, and this is apparently all what counts.

Other examples of Zombie Scientists are:

And then of course, there is Olivier Voinnet.